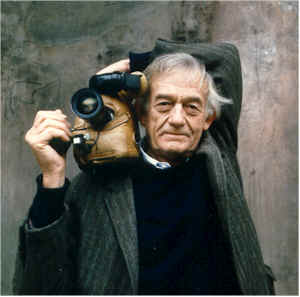 Born in London on July 18, 1921, Leacock grew up on his father’s banana plantation in the Canary Islands until shipped off to boarding schools in England at the age of eight. He had no way of telling his schoolmates what it was like to live in the Canary Islands. He took up photography with a glass plate camera, built a darkroom, developed his pictures but was not satisfied. At age 11 he was shown a silent film Turksib about the building of the Tran Siberian Railway. He was stunned and said to himself, “All I need is a cine-camera and I can make a film that shows you what it is like to be there.”

Aged 14, he made Canary Bananas, scripted, directed, filmed and edited by him. It tells you all you need to know about growing bananas but did not, in his opinion, give you “the feeling of being there.” He spent to rest of his life trying to achieve this goal.

Having filmed in the Canary Islands and then in the Galapagos Islands for ornithologist David Lack’s expedition, he moved to the United States and majored in physics at Harvard in order to master the technology of filmmaking. Meanwhile he worked as cameraman and assistant editor on the other people’s films, notably To Hear Your Banjo Play, which filmed a folk music festival atop a mountain in South Virginia, where there was no electricity, with a 35mm studio camera and 35mm film sound recorder, a rare achievement at that time. Three years as a combat photographer in Burma and China followed by 14 months as cameraman on Robert Flaherty’s Louisiana Story, an extraordinary experience of immense value to his future work.

Many relatively conventional jobs followed, until 1954. He was then asked to make a report on a traveling tent theater in Missouri—the first film that he wrote, directed, photographed and edited himself, since Canary Bananas.

This film, Toby and the Tall Corn, went on the cultural TV program, Omnibus, in prime time and brought him into contact with Robert Drew, an editor at Life Magazine in search of a less verbal approach to television reportage.

His primary contribution to classroom academic film in the United States is a series of approximately five films made for the Physical Science Studies Committee (PSSC) in the late 1950s, A Magnet Laboratory, Frames of Reference, Electric Fields, Coulomb’s Law, and Crystals. One of the pioneers of the “Cinéma Vérité” movement, his documentary work also appeared in schools, as edited versions of films made originally for U.S. television networks. Through his teachings he has influenced many filmmakers, and, from his farm in Sartilly, France, continues to produce his own documentary work with his partner and colleague Valerie Lalonde. A brilliant essayist and film theoretician, Leacock champions the right of the individual filmmaker to create and produce his or her own work on a low budget and insists on the necessity of retaining distribution rights as well.