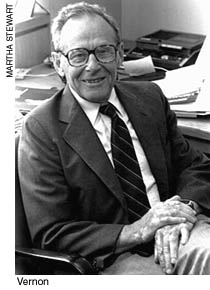 Raymond Vernon, the Clarence Dillon Professor of International Affairs, Emeritus, at the Kennedy School of Government, was a member of the Marshall Plan team and a central player in the development of the International Monetary Fund (IMF) and of the General Agreement on Tariffs and Trade (GATT). “Ray Vernon possessed a wide-ranging knowledge of international trade and the economics of developing nations that contributed greatly to the expansion of Harvard’s global focus in the postwar era,” said President Neil Rudenstine.

At the Kennedy School, Vernon was a member of the Center for Business and Government, teaching courses on the role of multinational enterprises and the political economy of the European Union. His research illustrated the breadth of his interests and his grasp of economics, politics, and history.