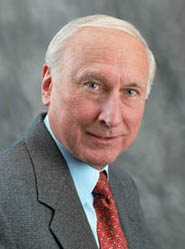 Originally from Pennsylvania, Raymond S. Stata received both his S.B. and S.M. in Electrical Engineering from MIT. In 1965, Stata founded Analog Devices, Inc. with his former MIT roommate, Matthew Lorber ’56 E.E. and Richard Burwen (a Harvard alumnus). He served as senior vice president for marketing, sales and engineering at the company before assuming the position of president in 1971; he has been chairman and chief executive officer since 1973. “One of the things I like best about running a company is trying to create the kind of culture that allows people to grow and develop,” he says. Headquartered in Norwood, MA, Analog Devices designs, manufactures and markets analog, mixed-signal, and digital signal processing equipment. As of 1995, Analog Devices had 6,000 employees and sales of $941 million.