The below biographical sketch is abridged from the 2000 National Book Foundation Medal Award Presentation. 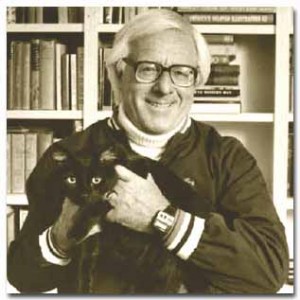 Novelist, short story writer, essayist, playwright, screenwriter, and poet, Ray Bradbury was born in Waukegan, Illinois 80 years ago. He grew up in Illinois and Arizona and his family moved to Los Angeles in 1934, where Mr. Bradbury has lived ever since.

He married Marguerite McClure in 1947. They have four daughters: Tina, Ramona, Susan, and Alexandra. Ray Bradbury’s first published story was called “Hollerbochen’s Dilemma,” and it appeared in Imagination! magazine. The author was 18 years old.

Since that time, how can we even begin to count all of the ways in which Ray Bradbury has etched his indelible impressions upon the American literary landscape? There are few modern authors who can claim such a wide and varied province for their work, spanning from the secret inner-worlds of childhood dreams, to the magic realism of everyday life, to the infinite expanses of outer space.

Half a century ago, The Martian Chronicles was published and soon thereafter Fahrenheit 451 (by the way, in Europe that would be “Centigrade 283”), the quintessential book lovers’ book written in nine days; and then Dandelion Wine, I Sing the Body Electric, The Illustrated Man, The October Country, Something Wicked This Way Comes. (By the way, the original title was Look Out, Here Comes Something Wicked.) Ray Bradbury’s prodigious and seemingly never-sleeping imagination continues to delight us.

When it comes to a novel like Fahrenheit 451, I don’t know how many of you know, but I wrote it in the library, the basement at UCLA. This is 50 years  ago. I had no money to rent a proper office. I had a large family at home and I needed to have a place where I could go for a few hours. I was wandering around the UCLA campus and I looked down below and I listened, and down in the basement I heard this typing. So I went down in the basement of the UCLA library and by God there was a room with 12 typewriters in it that you could rent for 10 cents a half-hour. And there were eight or nine students in there working away like crazy, so I moved in there one day with a bag of dimes and I began inserting dimes into the machine and the machine released the typewriter, and you’d have half an hour of fast typing.

Can you imagine what it was like to write Fahrenheit 451 in the library where you could run upstairs and feel the ambience of your beloved writers; and you could take books off the shelf and discover things that you might want to put in your book as a quote and then run back down and finish writing another page. So over a period of nine days I spent $9.80 and I wrote Fahrenheit 451.

Something Wicked This Way Comes

A young editor came along who was starting a new magazine and needed material. He said, “I have very little money. I’ve got $400. Is there something you could sell me for $400?” I said,”Yes, I have this novel, and I’d like to have it published in the magazine before it comes out in book form,” and he said, “I will take it.” So I sold Fahrenheit 451, and it appeared in the second, third, and fourth issues of Playboy.

But a wonderful thing happened concerning one of my first books. Back in 1949 my wife was pregnant and we had absolutely no money in the bank. Our friend Norman Corwin, the great radio writer, producer, director, a dear friend, said to me, “Ray, why don’t you come to New York and let the editors see your face and maybe you’ll sell something there.”

I arrived at the YMCA, the Sloan House, moved in there for $5 a week and proceeded to show my short stories to editors all around New York City, but nobody wanted my short stories. They said, “Don’t you have a novel?” I said, “No I’m a sprinter.”

But finally I had dinner my last night in New York with Don Congdon and Walter Bradbury, no relation of mine. Walter Bradbury at Doubleday. And sitting at dinner that night he said to me, “Ray, what about all those Martian stories you’ve been writing in the pulp magazines during the last 10 years? Don’t you think they would make a novel if you wove them together in some sort of tapestry and called it The Martian Chronicles?” I said, “Oh my God.” He said, “What do you mean?” I said, “I read Winesburg, Ohio by Sherwood Anderson when I was 24 and I said to myself, ‘Oh God, wouldn’t it be wonderful if someday I could write a book as good as this but put it on the planet Mars.'”

I made an outline, I named some characters, but I forgot all about it and suddenly here was Walter Bradbury suggesting to me a possible novel I’d written without knowing it. So he said, “Do an outline. Come tomorrow to the Doubleday offices and if I read your outline and like it I’ll give you $750.”

From The Dust Returned

I stayed up all night at the Y. I wrote the outline. I took it to him the next day and he said, “Yes, this is it. Here’s $750.” He said, “Now do you have any other material that you could give me that we could kid people into thinking it was a novel?” And I said, “Yes, I have a short story about a man with tattoos all over his body and at night when he dreams he perspires and the tattoos on his body come to life and tell their stories.” And he said, “Here’s another $750.”

So in one day I sold The Martian Chronicles and The Illustrated Man for $1,500. I was rich. And that’s, you know, 53 years ago and money went a long way then. It paid for our rent for the next two years. Our rent was only $30 a month. It paid for our baby. Babies were cheap back then. It cost $100 for our baby. And it was a down payment on a little tract house when we moved inland further. The book came out and there were very, very few reviews. In fact, only one. I was in a bookstore. I bumped into Christopher Isherwood. I did not know him. I grabbed a copy of my book; I signed it and gave it to him. I thought, Oh Christ, you know, I know he’s thinking, One more book to read. Oh God.

But three days later Christopher Isherwood called me and said, “Do you know what you’ve done?” I said, “No, what have I done?” He said, “You’ve written a remarkable book, and I’m going to be the book editor and writer for Tomorrow Magazine next October and this will be my first review.” So he did a three-page review of The Martian Chronicles which introduced me to the intellectual world and saved my soul.

So that was the only review. But he introduced me to Gerald Heard and finally my hero, Aldous Huxley, at tea one day. I hate tea. My God, I hate tea. And you have to pretend to like tea when you’re sitting with Aldous Huxley. And Mr. Huxley leaned forward during tea and he said, “Do you know what you are?” And I said, “No, what am I, Mr. Huxley?” He said, “You’re published. You’re a poet.” I said, “Is that what I am? Is that what I am.” Aldous Huxley was telling me that I was a poet and I had yet to write one decent poem. I was working at it but it didn’t come right, so I put all my poetry into my books.

So through Isherwood, I met a lot of wonderful people and over the years slowly, slowly, slowly, The Martian Chronicles came into being. I wrote a whole series of essays and short stories and one day woke up and saw that I’d written a novel, and that’s still around.

Along the way people said to me, “Ray, when are you going to do a screenplay?” Because I love motion pictures. I’ve seen just about every one ever made. A lot of the bad ones and a lot of the wonderful ones over and over again. I said, “Yes, there’s one man I’d love to work for, that’s John Huston,” and I knew that I wanted to work for him. Well, I gave John all of my books of short stories one day in 1951, and he wrote back from Africa where he was making The African Queen and he said, “Yes, I agree with you, someday we’ll work together. I don’t know on what.” 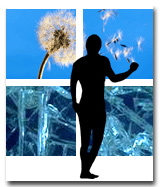 The day finally came. I came home from a bookstore one day and my wife said, “John Huston just called. He wants you to come to his hotel.” I went to John Huston’s hotel. I walked into his room. He put a drink in my hand. He sat me down and he leaned over and he said, “Ray, what are you doing during the next year?”

I said, “Not much, Mr. Huston. Not much.” And he said, “Well, Ray, how would you like to come live in Ireland and write this screenplay of Moby Dick?” And I said, “Gee, Mr. Huston, I’ve never been able to read the damn thing.”

He’d never heard that before and he thought for a moment and then he said, “Well, I’ll tell you what Ray. Why don’t you go tonight, read as much as you can, and come back tomorrow and then tell me if you’ll help me kill a white whale.”

So I went home that night and I said to my wife, “Pray for me.” She said, “Why?” I said, “Because I’ve got to read a book tonight and do a book report tomorrow.”

Luckily I was at the right age to read the book. I was 33 years old. I’d tried when I was younger. It just didn’t work. But what I saw there is a part of myself, the gift of metaphor.

All the early writers in America, Melville and Poe and many of the others wrote in metaphorical style. You could remember their stories. I raced through the book. I didn’t read it. I looked at all the metaphors and I came back the next day and I said, “Yes, I’ll do it.” 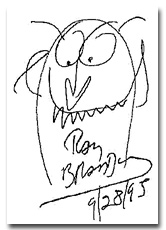 And finally, after seven months of hard work, a day of great passionate relaxation came to me. I got out of bed one morning in London and I looked in the mirror and I said, “I am Herman Melville.” I sat down at the typewriter and in eight blazing hours I wrote the last 40 pages of the screenplay and it all came out right; for that one day, for a few hours, the ghost of Melville was really in me. Was really in me.

I ran across London and I threw the screenplay into John Huston’s lap and I said, “There, I think it’s finished.” And he read it and he said, “By God, start the cameras.”

Now it’s time to wind this up and to show my appreciation for this magnificent Medal. My moment with Herman Melville in many ways is equal to what has occurred to me in my lifetime. I’ve researched my life. I’ve looked into myself. I’ve tried to find me. Along the way I’ve located myself.