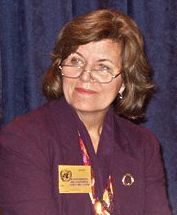 Dr. Randall Caroline Forsberg is the Executive Director of the Institute for Defense & Disarmament Studies (IDDS), a think tank she founded in 1980 for research and education on ways to reduce the risk of war, minimize the burden of military spending, and promote democratic institutions. Dr. Forsberg worked at SIPRI, the Stockholm International Peace Research Institute, starting in 1968, and was a regular contributor to the SIPRI Yearbook of World Armaments and Disarmament, writing on US and Soviet nuclear weapons, until 1979. At IDDS, Forsberg publishes the Arms Control Reporter, a monthly reference journal, and she is the series editor of the annually updated IDDS Database of World Arms Holdings, Production, and Trade.

In 1989 Forsberg briefed President Bush and his foreign policy and security Cabinet officials on US-Soviet arms control issues. In 1995, she was appointed by President Clinton to the Advisory Committee of the US Arms Control and Disarmament Agency.

Click here for supplemental reading about Randall Forsberg on Amazon.