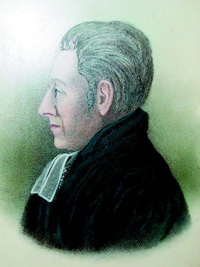 Emerson’s father, the Reverend William Emerson.
Courtesy of the Emerson House in Concord

Ralph Waldo Emerson was born in Boston, Massachusetts, on May 25, 1803, the fourth of eight children, only four of whom survived to adulthood. The family home was the parsonage of the First (“Old Brick”) Church in Boston where Emerson’s father, the Reverend William Emerson, served as its minister. The house was located near Boston’s busy waterfront, at Summer and Chauncy Streets, where Emerson felt “imprisoned in streets and hindered from the fields and woods” amidst the busy commercial activity.

As a child, Emerson experienced wholesome self-sacrifice in a family atmosphere of hard work and discipline. He was taught grammar and reading when he was three, reciting his lessons to his father before breakfast. Recreation in the home was serious: reading history and poetry, practicing rhetoric and oratory. Emerson’s early life was characterized by honesty and unselfishness. He was shy, passive, and never spoke ill of anyone. Emerson was also not physically healthy and his rheumatism, bad eyesight, and painful limbs would afflict him throughout his life.

Emerson’s father died suddenly when Emerson was only eight years old. Emerson’s mother, the deeply religious Ruth Haskins Emerson, was left with a large family and no means of support. She sold her husband’s library and took in boarders to provide for her children—their souls, their minds, and their bodies. As for their souls, the children were to be pious and dutiful for their eternal welfare. Good minds meant that her sons would be well read, learned, and Harvard educated. The Lord, she believed, would provide for their bodies. Still, poverty was never far from Emerson as a boy. He was not resentful of their situation, but thought it good discipline that kept his eye on the realities of life and away from frivolity. Emerson did not give in to self-pity.

To help care for and instruct the children, Emerson’s aunt, the eccentric Mary Moody Emerson, came to live with the family and quickly became the dominant influence of Emerson’s childhood and youth. Without formal education, “Aunt Mary” still possessed a richly fertile mind, was widely read, and familiar with the leading thinkers of the day. She was intellectually inquisitive, and first introduced Emerson to Hindu scriptures, Neoplatonism, and natural religion. Aunt Mary also taught her nephew many of the aphorisms he would rely on throughout his life: “Lift your aims;” “Always do what you are afraid to do;” and “Despise trifles.” She taught him the dangers of prosperity, and the defiant right of the individual reader to question texts. She helped to open his mind.

One of Emerson’s boyhood chores was to feed the cow his mother kept on Boston Common.
Courtesy of the Boston Athenæum.