“I do not love sensation preaching….We come to church properly for self-examination, for approach to principles to see how it stands with us, with the deep and dear facts of right and love. At the same time it is impossible to pay no regard to the day’s events….We are not stocks or stones, we are not thinking machines. And it were inhuman to affect ignorance or indifference on Sundays to what makes our blood beat and our countenance dejected Saturday or Monday. No, these are fair tests to try our doctrines by, and see if they are worth anything in life. The value of a principle is the number of things it will explain; and there is no good theory of disease which does not at once suggest a cure.” —Ralph Waldo Emerson 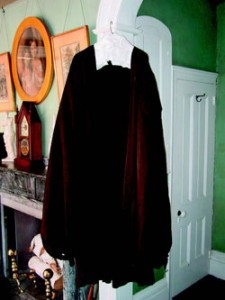 Emerson wore this understated garment when he preached.
Courtesy of the Emerson House in Concord.

On October 10, 1826, Waldo Emerson preached his first sermon, Pray Without Ceasing, in his uncle Samuel Ripley’s church in Waltham, Massachusetts, and was approbated to preach by the Middlesex (Massachusetts) Association of Ministers. This procedure licensed him to speak from the pulpits of churches that were now inviting him to serve as a “supply” (or substitute) preacher. He could earn money as he continued to develop his ideas, sermons, and preaching style. Over the next several years, except for a trip south for his health, he would preach in Concord, Boston, Northampton, Deerfield, Greenfield, Lennox, Harvard, Watertown, Carlisle, Dedham, Medford, New Bedford, and Lexington, Massachusetts, where he was the regular supply preacher for two years. He also led services in Concord, New Hampshire, where he met his first wife, Ellen Tucker. Emerson deliberately delayed taking on a full-time position until he was ready. 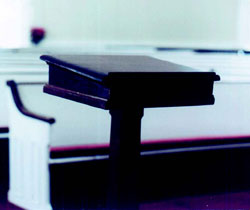 Emerson was a regular supply preacher in Lexington, Massachusetts, where he spoke from this simple lecturn.
Courtesy of the Follen Church.

Physically, when Emerson took the pulpit, he was impressive. Although he was six feet tall, he was not muscular but slender at no more than one hundred and fifty pounds, with long arms, even longer legs, sloping shoulders, and a large bony nose. His eyes were blue, his hair dark brown, hiscomplexion clear. In dress, he was always neat, wearing black clothes and silk hat in the city, and dark grey with soft felt hat in the country. He would often clench one fist when he spoke, lowering it slowly in a gesture of bridled emotion. His speaking style was eloquent, simple, and effective—natural in tone, and free of “pulpit voice” although when he spoke the sound could fill a church sanctuary. In content, he was never trivial and possessed a marvelous vocabulary. He stressed ethical principles over doctrine and used homely illustrations rather than confining himself to biblical ones, as was the custom. He used a simple order of service: prayer, scripture, hymn, prayer, hymn, sermon, prayer, hymn, and benediction. Many testimonials survive that describe Emerson’s preaching as fresh, imaginative, and well received. Transcendentalist Bronson Alcott, years before the two men were friends, heard Emerson preach and was struck with “the youth of the preacher, the beauty of his elocution, and the direct and sincere manner in which he addressed his hearers.” 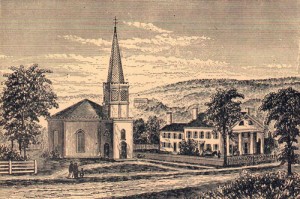 Church in Lexington Massachusetts
Courtesy of the Follen Church.