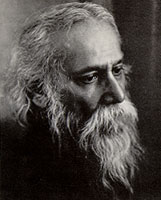 At midnight the would-be ascetic announced:
“This is the time to give up my home and seek for God. Ah, who has held me so long in delusion here?”
God whispered, “I, ” but the ears of the man were stopped.
With a baby asleep at her breast lay his wife, peacefully sleeping on one side of the bed.
The man said, “Who are you that have fooled me so long?”
The voice again said, “They are God, ” but he heard it not.
The baby cried out in its dream, nestling close to its mother.
God sighed and complained, “Why does my servant wander to seek me, forsaking me?”

How profoundly simple is this parable from The Gardener by Rabindranath Tagore. Born in the same year as Alfred North Whitehead, 1861, the liberal religious Poet of India exemplifies life-affirmation and world-affirmation in uniquely potent literature of love. In 1913 he received the Nobel Prize in Literature. Albert Schweitzer declared, “This completely noble and harmonious thinker belongs not only to his own people but to humanity.”

Tagore’s parables and prayers express a philosophy of polarity whose God is temporal-eternal, actual-potential, Becoming-Being. He dramatizes and personalizes the modern scientific worldview of panentheism (not pantheism) independently developed by Whitehead and the contemporary American Unitarian Universalist philosopher, Charles Hartshorne. Rabindranath Tagore has contributed to humanity a legacy of prayers which express an intimacy characteristic of the Psalms of the Old Testament, but they avoid the latter’s recurrent vindictiveness. His I-Thou experience is as vivid as that communicated in the Confessions of Augustine, but it avoids the latter’s debilitating otherworldliness. Consider the following remarkable prayer which is also uniquely a parable.

I had gone a-begging from door to door in the village path, when Your golden chariot appeared in the distance like a gorgeous dream, and I wondered who was the King of all kings!

My hopes arose high, and methought my evil days were at an end, and I stood waiting for alms to be given unasked and for wealth scattered on all sides in the dust.

The chariot stopped where I stood. Your glance fell on me, and You came down with a smile. I felt that the luck of my life had come at last. Then of a sudden You held out Your right hand saying, “What have you to give Me?”

Ah, what a kingly jest was it to open Your palm to a beggar to beg! I was confused and stood undecided, and then from my wallet I slowly took out the least little grain of corn and gave it to You.

How great was my surprise when at the days end I emptied my bag on thefloor to find a least little grain of gold among the poor heap! I bitterly wept and wished that I had the heart to give You my all.

STRIKE AT THE ROOT