Rabindranath Tagore: Poet of Power – The Goethe of India

The Goethe of India by Albert Schweitzer 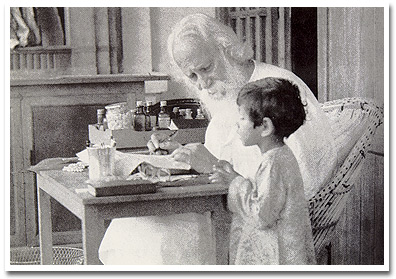 Modern Indian thought makes a noble attempt to get really clear about itself in Rabindranath Tagore. Born in 1861, he is at the same time thinker, poet, and musician. He has himself translated his important works into English. The attention of Europe was directed to him by his becoming the recipient of the Nobel Prize for Literature in 1913. For many years he lived at Santiniketan, in Bengal, where he built up a school and college on modern educational lines.

With Tagore, ethical world and life affirmation has completely triumphed. It governs his worldview and will suffer nothing of world and life negation beside it. This has all the significance of a really great deed. A process of development that has been going on for centuries reaches in him its natural conclusion. He demands that we should belong to God with the soul and serve God actively in the world.

Joy in life and joy in creation belong, according to Tagore, to our human nature. He is as little able as the others who had attempted it before him to really found the worldview of ethical affirmation on knowledge of the universe. But the Goethe of India gives expression to his personal experience that this is the truth in a manner more profound and more powerful and more charming than anyone had ever done before. This completely noble and harmonious thinker belongs not only to his own people but to humanity.