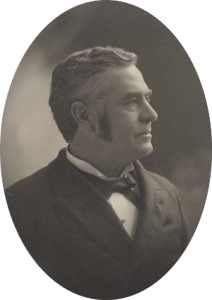 The greatest Universalist domestic missionary in the post-Civil War period, Shinn was born on January 1, 1845 in Bingamon, Virginia (later West Virginia) to Elisha and Mary (LeFevre) Shinn. His father died when he was only two, but his mother remarried a doctor. He had little formal education, and at the age of 16 enlisted in the Union Army. He was taken prisoner once and then paroled, and later saw action at Appomattox, where General Robert E. Lee surrendered.

He attended an academy in Ohio, and then taught school. Shinn’s step-father was a Universalist, and Shinn was converted after reading Thomas Baldwin Thayer’s Theology of Universalism. In 1867 he began attending Canton Theological School at St. Lawrence. On his way to school he stopped at the meeting of the Universalist General Convention in Baltimore. He listened to the debates and became disturbed by all the wrangling. Finally, he stood up and told the assembled delegates that he had been on his way to school to prepare himself for the ministry, but said he now felt like he would return home, “for evidently Universalist ministers could write better than they could talk.” Harmony was apparently restored, and Shinn continued with his plans.

Shinn finished school in 1879, and was fellowshiped by the Vermont Convention, and then ordained in Gaysville, his first church. He tried, without success, to start a church in Wheeling, West Virginia, and then he returned North to work for the Universalist Publishing House. In 1876 he married Maria Burnell, and they had three sons who lived to adulthood. During the early years of his ministry, Shinn served several brief pastorates, including congregations in Massachusetts, New Hampshire, Vermont and Maine. He usually tried to establish preaching stations nearby as well. When he was in Plymouth, New Hampshire in 1882 he set up fourteen such stops on his circuit. It was during this time that he started summer gatherings which grew into National Summer Meetings starting at the Weirs on Lake Winnepesaukee, New Hampshire.

Others recognized that Shinn had a particular fitness for mission work. After a visit to Canada in 1883, he served in Omaha, Nebraska, where they built a church in less than two years. After 1891 even short pastorates would not suffice, as Shinn became an itinerant missionary moving from place to place. The “Grasshopper” eventually preached in every state in the union, as well as numerous locations in Canada. When he signed the Ferry Beach, Maine summer register in 1904, he listed his home as “Everywhere.”

Shinn formulated several plans as to how to missionize the country. In 1895 he was named “general missionary” by the General Convention. Even prior to then he had singled out the South as his field of special work, and then in 1900 the convention gave him the title of “southern missionary.” Shinn was constantly traveling and preaching, covering as much as 700 miles per week, often by foot or horseback. He believed in having a new church construct a building as soon as possible after forming as a visible sign of their presence in the community. In Georgia six churches built buildings between 1896 and 1902. Russell Miller estimates that Shinn recruited hundreds of new members to Universalist churches, and oversaw the erection of at least forty buildings. Despite his unflagging spirit for spreading the word, he was often criticized for preaching Universalism in rural places where it was not likely to grow, and especially later in his career, he preached more in urban centers. There was also some conflict over authority after the Universalists established the office of general superintendent in 1898. In 1901 Shinn was placed under the general superintendent’s authority. Shinn had a lifelong interest in temperance causes, and frequently lectured on the topic, was a member of the Prohibition Party and the Good Templars. Shinn’s war record made him a popular speaker on patriotic themes. He continued to preach right up until the months before he died. In the summer of 1907 he visited four churches in South Carolina. By this time many of the southern states had district superintendents. He died on September 6, 1907 in Medford, Massachusetts, leaving a remarkable legacy of preaching Universalism in every nook and cranny of North America.