A Book by the Community Church of New York

and Bruce A. Southworth 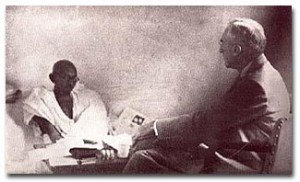 In 2007 we at Community celebrated the centennial of John Haynes Holmes’ arrival in New York to serve The Church of the Messiah (which was how the 2nd Congregational Unitarian Church had been known since 1839). That year-long series of special worship services, guest speakers, forums, and other events recognized Holmes’ special relationship with Mohandas Gandhi, which was one among many of his contributions as a minister, spiritual leader, and prophetic activist.

I am indebted to Rev. Herbert Vetter for his suggestion that I edit a volume that would share more widely the story of Gandhi, Holmes, and The Community Church.  He has provided inspiration, many photographs, research, and always insightful and cogent editorial assistance from the very beginning of this project.  This volume would not be what it is without his gifts – including gentle nudging to meet publishing deadlines.  Any errors, omissions, or other miscues, however, are mine and for which I am responsible.

I would also like to add my admiration and appreciation for Herbert Vetter’s extraordinary ministry from his service as founder and director of the Cambridge Forum sponsored by First Parish in Cambridge (Unitarian Universalist) to his ongoing work with the Harvard Square Library project, as well as his own prayers, essays and books.  His collegiality, friendship, and service to the Unitarian Universalist faith tradition are exemplary and stellar.

Personally, I became acquainted with the powerful ministry of John Haynes Holmes and The Community Church of New York while attending Union Theological Seminary in New York City.  It was evident that Holmes’ prophetic and community focused vision had continued with the far-reaching ministry of Donald Szantho Harrington.  And the continuing influence of both Gandhi and Holmes on this activist and spiritually lively congregation was equally clear and inspiring.

Their stories remain a vivid part of Community’s Vision to help “build the Beloved Community” and our Mission “to grow as a caring, justice-making, anti-racist diverse spiritual community.”  With boldness and a good measure of humility, along with strong faith, we too seek to do good work and live stories of hope and justice that make the world awaited more nearly the world attained.