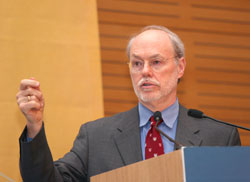 UCD awarded the inaugural Ulysses Medal to Dr. Phillip Sharp (MIT) on March 10, 2005, for his outstanding contribution to biomolecular discovery and to advances in medical treatment of diseases such as multiple sclerosis, hepatitis and cancer. The event was kindly sponsored by SFI. Dr. Phil Sharp was awarded the Nobel Prize for his discovery that an individual gene does not have to be a single, continuous stretch of DNA, but instead can be made up of several DNA segments. This discovery had major implications for genetic discovery and importantly for research into heredity diseases.

Before this discovery, scientists believed that a gene was a continuous stretch of code within a long double-stranded DNA molecule. They worked on the basis that when a gene was activated, its information was copied into a single-stranded RNA molecule (known as messenger RNA), which in turn translated the information into the production of a protein.

RNA (Ribonucleic acid) is a chemical memo that carries genetic information from the DNA, where it is stored, to parts of the cellular machinery that turns the genes into proteins, the building blocks of life.

With Sharp’s discovery of split genes came a second revelation—that the RNA could edit out and select genetic code in a process known as splicing. These two processes opened up an entirely new evolutionary mechanism, one in which gene segments are rearranged or shuffled by RNA. In the research that followed Sharp’s discovery, scientists identified several diseases, including forms of anemia and leukemia that are due to RNA splicing errors.