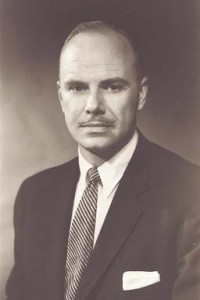 The last general superintendent of the Universalist Church in America (UCA), Giles steered the Universalists into the final stage of merger with the Unitarians. He was born in Haverhill, Massachusetts on January 23, 1917. Giles received his degrees from Tufts University, and began a long and varied career in the ministry with pastorates in Southbridge, Massachusetts and Concord, New Hampshire. This was interspersed with stints of military service as an Air Force chaplain. He joined the Universalist headquarters staff in 1949 and served in the capacity of director of fund-raising (Unified Appeal), assistant to the general superintendent, and finally director of Ministry and Church Extension. He was named general superintendent on his 40th birthday.

Giles took charge of a disorganized and inefficient headquarters hampered by powerful independent state conventions. In response he proposed Operation Bootstrap, a four-year program to revitalize the faith. Although his plan was approved by the trustees, and a full-time extension director was appointed and ministerial pensions increased, Giles found the Universalists were preoccupied with the impending merger. After months of study of the information prepared by the Joint Merger Commission, Universalist congregations voted overwhelmingly to affirm the concept. After merger, Giles’s administrative skills were put to good use as a vice-president for Field Services, a District Executive, and later as head of development.

Later in his career Giles served churches in Denver, Colorado and Muncie, Indiana, and a number of interim positions. Giles recalled that merger “was a good idea and that it worked well,” and that when he was appointed leader of the Universalists, they were “wary of power and institutions,” and his goal was to strengthen the Universalist denomination “so it could carry more of its weight in the merger.”