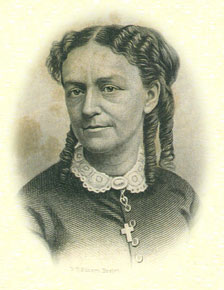 One of the earliest women ordained a minister in the Universalist church, Hanaford was born in Nantucket, Massachusetts on May 29 (or May 6), 1829. Her mother died soon after her birth, and Phebe was the only child of this marriage. When her father remarried, he brought a son to the union, and together he and his new wife had seven more children. Phebe Coffin was a descendant of both the pilot of the Mayflower, and the founder of the first settlement on Nantucket. She was brought up a Quaker. Trained as a teacher, she spent four years on the island practicing her profession before marrying Joseph Hanaford, a physician, in 1849. After her marriage she became a Baptist, but was converted to Universalism following the deaths of two of her siblings. The Hanafords had two children, Howard and Florence. The couple separated in 1870. While raising her children Hanaford became a writer to help supplement the family income. She produced 14 books, and also wrote poetry and prose for periodicals. After she became a Universalist, she edited the monthly magazine, The Ladies Repository, and a Sunday School paper, Myrtle.

Hanaford was encouraged to pursue the ministry by Olympia Brown, the first Universalist woman minister. Hanaford was ordained and installed at the First Universalist Church in Hingham, Massachusetts in 1868, the first ordination of a woman in New England. Julia Ward Howe composed a hymn for the occasion. Hanaford was remembered for her “Floral Sunday” where the church was filled with flowers and canaries were suspended in cages.

She was called to the Universalist Society of New Haven, Connecticut in 1870. She brought with her the woman who became her life-long companion, Ellen Miles. While in Connecticut, Hanaford served as the first woman chaplain for the House and Senate. In 1874 she went to Jersey City, New Jersey, and she later served another congregation in New Haven, and finally in Portsmouth, Rhode Island. She retired from active ministry in 1891.

Always a strong advocate of social reform, Hanaford signed a pledge not to drink liquor at the age of eight. Throughout her career she was a strong supporter of women’s rights, and was involved in several organizations. She once wrote, “Man was not made subject to woman, nor should woman be subject to man. Neither men’s rights nor women’s rights should be considered, but human rights — the rights of each, the rights of all. Men and women rise or fall together.” Hanaford was especially interested in the biographies of prominent women, and she published Women of the Century (later reissued as Daughters of America) in 1876. She lived for a time in New York City, continuing to be active in women’s causes, including membership on the revising committee for The Women’s Bible. Later she moved to Rochester, New York, and died there on June 2, 1921.