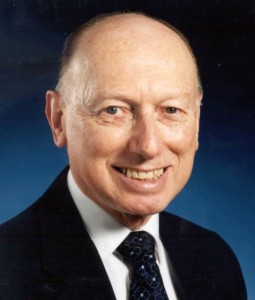 Dr. Peter Glaser, Vice President of Advanced Technology at the National Space Society (retired), was associated with Arthur D. Little, Inc., Cambridge, MA (1955-1994) and now serves as a consultant to the company.

He was project manager for the Apollo 11 Laser Ranging Retroreflecter Array installed on the lunar surface of July 20, 1969, and two other arrays installed on subsequent missions—the only science experiments still in operation on the moon. He also was responsible for the Lunar Heat Flow Probes and the Lunar Gravimeter, which were operational during the Apollo program, and the Initial Blood Storage Experiment flown on the NASA shuttle Columbia (STS-61-C) in January 1986, to explore gravitational effects on human blood cells. In 1968 he presented the concept for, and in 1973 was granted the U.S. patent on, the Solar Power Satellite to supply power from space for use on the Earth.

Dr. Glaser served on several NASA Committees including Task Force on Space Goals, NASA Advisory Council (1984-1989), and Lunar Enterprise Case Study (1988-89). He formed the SUNSAT Energy Council in 1978; an NGO associated with the United Nations Economic and Social Council, and currently serves as its Chairman. He also chaired the Space Power Committee of the International Astronautical Federation (1984-89). He has served on committees of the National Academy of Sciences and the Office of Technology Assessment of the United States Congress.

He is a fellow of the American Association of the Advancement of Science and the American Institute for Aeronautics and Astronautics, and a member of the International Academy of Astronautics. In 1993 the International Astronautical Federation established the Peter Glaser Plenary Lecture to be given at the Annual Congresses. He was inducted into the Space Technology Hall of Fame of the United States Space Foundation in 1996. Dr. Glaser has published more than 300 technical papers and books.

—Courtesy of the National Space Society