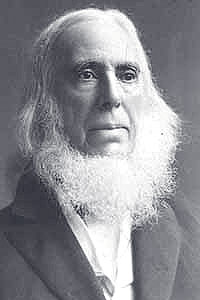 Born in New York City, this inventor, manufacturer, and philanthropist had only one year of formal education. After being apprenticed to a coachmaker, he made machines for shearing cloth and then perfected and patented a cloth-cutter which he manufactured. When he purchased a glue factory and improved its quality, that became a source of his wealth. Also after purchasing a plot on the Baltimore harbor front, he discovered rich iron ore on the property, then founded the Canton Iron Works, which increased his fortune.

He and Cyrus Field laid the first Atlantic cable.

He became the president of the North American Telegraph Company, which controlled most U.S. telegraph lines.

Peter Cooper fought for free public schools and vigorously opposed the use of public funds to support Roman Catholic schools.

He ran unsuccessfully for president of the United States.

He is best remembered as the founder of the Cooper Union in New York City, a school long celebrated for featuring free courses in the arts and sciences.

Cooper and his family were members of All Souls Unitarian Church, New York.