Below are two biographical perspectives on Pete Seeger, the first written by Richard Taskin, and the second written by Thomas Blair. 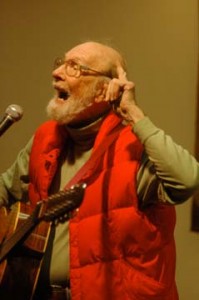 Musician, singer, songwriter, folklorist, labor activist, environmentalist, and peace advocate, Seeger was born in Patterson, New York, son of Charles and Constance Seeger, whose families traced their ancestry back to the Mayflower. Seeger grew up in an unusually politicized environment. His father, Charles, had been a music professor at the University of California at Berkeley, where his pacifism won him so many enemies that he quit teaching in the fall of 1918.

Seeger spent two unhappy years at Harvard and left before final exams in the spring of 1938. He made his way to New York, where he eventually landed a job with the Archives of American Folk Music. Seeger spent 1939 and 1940 seeking out legendary folk-song figures such as the blues singer Leadbelly and labor militant Aunt Molly Jackson. By 1940 he had become quite an accomplished musician, thanks in no small part to his enormous self-discipline and Puritan rectitude.

On March 3, 1940, Seeger met Woody Guthrie at a “Grapes of Wrath” migrant-worker benefit concert. In 1940 the duo helped form the Almanac Singers. With the entry of the United States into World War II, the Almanacs appeared on a coast-to-coast radio broadcast. By the time Seeger was drafted in 1942, critics had called attention to the Almanacs’ ties, and the FBI had already begun to fill what is no doubt a very fat file on the tall, skinny balladeer. While on his first leave from the Army, Seeger also married Toshi Ohta, who virtually all of their friends agree played a crucial role in organizing Seeger’s career and managing his finances.

Seeger was apparently not entangled in the sectarian squabbling that contributed to the Communist Party’s weakness at the end of WWII. He had joined the Party in 1942 and would depart about 1950, but like many artists within the Party orbit, he was often viewed as unreliable.

By 1950 Hays and Seeger, along with Fred Hellerman and Ronnie Gilbert, formed the Weavers and enjoyed instant access with highly sweetened versions of “Goodnight Irene” and other folk tunes. Just as quickly as the Weavers topped the charts, however, their career was torpedoed by blacklisting, Red-baiting, and numerous cancellations of their performances at the last minute. Seeger spent the fifties defining and nurturing his own audience. He still performed occasionally with the Weavers, but he mainly supported his family with appearances on the college circuit and at Left summer camps. He also recorded five to six albums per year for Folkway Records.

In 1955 Seeger was subpoenaed by the House Un-American Activities Committee and became one of the few witnesses called that year who didn’t invoke the Fifth Amendment. In a dramatic appearance before the committee, Seeger claimed that to discuss his political views and associates violated his First Amendment rights.

The following year, which saw Seeger compose “Where Have All the Flowers Gone?” Seeger, Arthur Miller, and six others were indicted for contempt of Congress by an overwhelming vote in the House of Representatives. In 1961 he was found guilty of contempt and on April 2 he was sentenced to one year in prison for each of ten charges (all ten sentences to be served concurrently). The following year his ordeal ended when the case was dismissed on a technicality.

Pete Seeger spent a considerable amount of time in the South during the civil rights marches of the 1960s. It was his variation of an old spiritual, which Seeger called “We Shall Overcome,” that has become an anthem of the crusade for equality in America. In the 1970s and 1980s Seeger focused his attention on environmental issues.

When Pete Seeger and his friends launched the sloop Clearwater into the Hudson River in 1969, he was in effect fulfilling a lifelong love of the outdoors and a longstanding desire to do something to clean up the environment polluted by irresponsible corporate and public water usage. 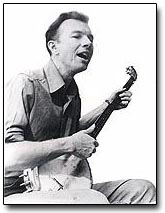 A member of the Community Church of New York, Pete Seeger was born to a musicologist and a music teacher, both faculty members of the Juilliard School in New York, NY; as a Philadelphia Inquirer reporter later wrote, it was a family “whose chromosomes fairly burst with music.” Music and activism blended naturally for Seeger, who at sixteen saw a performance that has since directed his life.As Seeger recalled: “In 1935 I was sixteen years old, playing tenor banjo in the school jazz band. I was uninterested in the classical music which my parents taught at Juilliard. That summer I visited a square dance festival in Asheville, North Carolina, and fell in love with the old-fashioned five-string banjo, rippling out a rhythm to one fascinating song after another.” Whereas most popular music seemed sappy or trivial to Seeger, these songs seemed frank, straightforward, honest. Folk music’s new convert was to become its greatest proselyte.

“I liked the rhythms,” Seeger said. “I liked the melodies, time tested by generations of singers. Above all, I liked the words.” 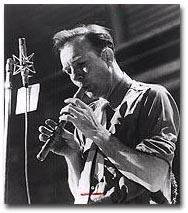 Seeger returned to boarding school at Avon Old Farms in Avon, Connecticut, where he dabbled in Marxism, music, and journalism, doing well enough in his studies to matriculate at Harvard in 1936. Harvard’s sociology department proved a weaker attraction than the life of a traveling musician; Seeger left college in the middle of his sophomore year, setting out to absorb American folk music straight from its roots in communities across the country. Helater explained that he got too interested in extracurricular activities to remain in school, commenting that if he were at Harvard, he would study languages, anthropology, and geography.

However, like Edwin Land and Bill Gates, Seeger did quite well with just half of a Harvard College education. Swapping watercolor paintings for food and shelter, Seeger traveled all around the United States, learning “a little something from everybody” as he sought to master the five-string banjo and internalize the folk traditions he’d come to love. On the road Seeger met Woody Guthrie and Huddie Ledbetter, who both became strong influences and collaborators in Seeger’s early career. 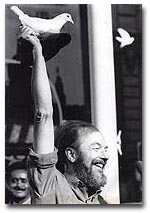 A dove of peace returns to Pete Seeger’s hand at a New York Theater Guild peace rally in 1969. Courtesy of the Boston Public Library Print Department.

In addition to churches, migrant camps, and everything between, Seeger made his way to the Library of Congress, where he fortified his background in folk music as an assistant in the Archive of American Folk Song.

Seeger, Guthrie, and others formed Seeger’s first group, the Almanac Singers, in 1940. Seeger and Guthrie traveled throughout the United States and Mexico as singer-activists, bolstering labor movements with song as they blended activism and folk music. In 1942, Seeger joined the Army, where he continued to play and sing, performing for his fellow soldiers and picking up “soldier songs” as he could.

Discharged a corporal in 1945, Seeger founded People’s Songs, Inc., a musicians’ union through which he hoped to bind labor movements and folk music in a relationship that would advance both. People’s Songs eventually grew to 3,000 members, and Seeger remained involved in politics, campaigning for 1948 Progressive candidate Henry A. Wallace and helping to establish the musical side of labor organizing.

In 1948 Seeger co-founded The Weavers, a folksinging quartet with which he recorded such classics as “If I Had a Hammer,” “Kisses Sweeter than Wine,” and “On Top of Old Smoky.” Seeger also toured extensively on his own, helping to establish the Newport (Rhode Island) Folk Festival and selling out such venues as Carnegie Hall. 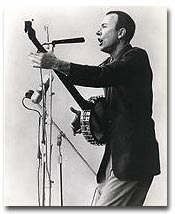 His position in mainstream music was stifled by blacklisting, however, as controversy surrounding his ties to the Communist Party led major television networks to keep him off the air. The House Committee on Un-American Activities called Seeger to hearings in 1955; instead of citing the Fifth Amendment as grounds for silence, Seeger cited the First, a move for which he was sentenced to a year in jail for contempt of court. Citing his unconditional willingness to share his music regardless of supposed political alliances—Seeger even offered to play a song for the court. Needless to say, the committee declined. Although his sentence for contempt was soon overturned, Seeger remained blacklisted by many organizations—briefly including even his alma mater, which finally invited him to Cambridge when students protested this prohibition. Nonetheless, he remained firm in his love of sharing music. “I’d sing for the John Birch Society or the American Legion, if they asked,” he said. “So far they haven’t.”

Seeger continued playing in spite of political controversy, recording such hits as “Where Have All the Flowers Gone?” and “Turn, Turn, Turn.” His clear and catchy singing and his mastery of the five-string banjo — as well as steel drums and several other instruments — have won him tremendous popularity. As Seeger wrote to his Harvard classmates in 1990: “Have been a traveling, performing singer and songwriter for fifty years, in every state of the union and thirty-five foreign countries. Fortunate to have a family that stuck by me, even when I traveled too much, or got into political hot water.” “Life has been easier on me than any lazy person like myself has the right to expect.” 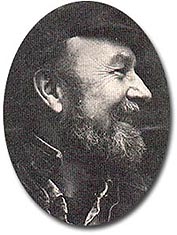 In his final years, the musician’s work extended to environmentalism and folklorist studies of America’s music. Among other projects, Seeger helped to organize the Hudson River Sloop Restoration, Inc., for which he raised over $60,000 to build a genuine Hudson River sloop, Clearwater. Clearwater now spearheads “sloop festivals,” at which residents of the Hudson’s banks collaborate to address pollution in the River and elsewhere. Whether in songwriting, musicology, or activism, Seeger enjoyed a life dedicated to music and to humanity, winning thousands of admirers and greatly influencing folk music and activism alike. He spent his later years on the Hudson River with his wife of nearly sixty years, in a cabin the couple and some friends constructed decades ago, enjoying his surroundings and still performing from time to time. Seeger’s wife, Oshi, died on July 9, 2013, and he died less than a year later in New York City on January 27, 2014.

Dunaway, David King. How Can I Keep from Singing?: The Ballad of Pete Seeger. New York: McGraw-Hill, 1981.