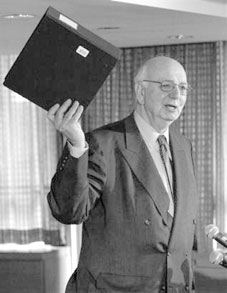 Paul Adolph Volcker, born in 1927 in Cape May, New Jersey, is best known as the Chairman of the Federal Reserve under United States Presidents Jimmy Carter and Ronald Reagan (from August 1979 to August 1987).

Volcker’s Fed is widely credited with ending the United States’ stagflation crisis of the 1970s by limiting the growth of the money supply, abandoning the previous policy of targeting interest rates. Inflation, which peaked at 13.5% in 1981, was successfully lowered to 3.2% by 1983 and has remained low ever since. The change in policy contributed to the significant recession the US economy experienced in the early 1980s, which included the highest unemployment levels since the Great Depression. The wisdom of Volcker’s focus on stabilized price levels is uncertain if one believes that it initiated an era of stagnant living standards and increased joblessness for much of the population.

Paul Volcker: The Making of a Financial Legend by Joseph B. Treaster