Paul Douglas, who identified himself twice in his autobiography as both a Unitarian and a Quaker, served as a trustee of the Abraham Lincoln Center (Unitarian) in Chicago. He was active in both All Souls Church (Unitarian) in Washington, DC and the Cedar Lane Unitarian Church in Bethesda, MD. The following celebration of his life is drawn from an article in the Illinois Historical Journal (Volume 83, Summer 1990) written by Edward L. Schapsmeier, Distinguished Professor of History at Illinois State University. 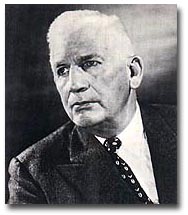 Paul Douglas was born in Salem, Massachusetts, on March 26, 1892, but the contours of his character were formed in the backwoods of Maine, where he was raised by a kindly stepmother. Young Douglas was forced by circumstances of poverty to work his way through Bowdoin College, from which he graduated in 1913 with a Phi Beta Kappa key. After securing a master’s degree at Columbia University in 1915, he did a year of postgraduate work at Harvard University and then earned the Ph.D. in economics at Columbia in 1921. Meanwhile, he taught at the University of Illinois, Reed College, and the University of Washington before accepting an appointment at the University of Chicago. He soon gained a professional reputation as an excellent teacher, a productive scholar, a humanitarian, and a civic activist. In 1927 Douglas became intrigued with the communist experiment going on in the Soviet Union. But after visiting Russia on a trade union mission and observing the aftermath of Lenin’s dictatorial powers, he rejected Marxist economic theory. Instead, he turned to socialism tempered by the pacifism and humanism of the Quaker faith he had espoused since 1920.

Douglas campaigned for Norman Thomas in the 1932 presidential election but gradually became a supporter of the New Deal as Roosevelt began to implement genuine social reforms.

Through the influence of Interior Secretary Harold L. Ickes, a fellow civic reformer from Chicago, and Labor Secretary Frances Perkins, who knew him as a professional economist, Douglas was appointed in 1933 to the Consumers’ Advisory Board of the short-lived National Recovery Administration. All the while, he was generating ideas and agitating for enactment of such New Deal legislation as the Social Security Act, Wagner Act, and Fair Labor Standards Act. He published Wages and the Family (1925), Real Wages in the United States, 1890-1926 (1930), Standards of Unemployment Insurance (1933), Theory of Wages (1934), Controlling Depressions (1935), and Social Security in the United States (1936). Long a friend of organized labor, he served from 1925 to 1942 as chairman of the board of arbitrators for the newspaper industry.

In Chicago, Douglas moved in both socialist and Democratic party circles. He served as vice-chairman of the League for Independent Political Action, was a member of the national committee of the Farmer-Labor Political Federation, and was treasurer for the American Commonwealth Political Federation (all socialist in orientation). In 1935 his friends urged him to run against Democratic Mayor Edward J. Kelly. When the Republicans refused to endorse him as their nominee, Douglas withdrew his candidacy. He ran in 1939 for the Chicago City Council as an Independent Democrat. He won, as it turned out, primarily due to Mayor Kelly’s endorsement of him and served as an alderman until 1942. 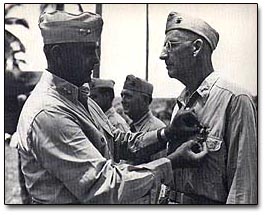 Receiving the Bronze Star for service
on Peleliu during World War II.

Paul Douglas’s gradual gravitation towards true membership in the Democratic party was hastened by his participation in Chicago politics, but it was his own conversion from pacifism to interventionism that propelled him to join the ranks of Franklin Roosevelt’s supporters. In conscientious compliance with his Quaker faith, Douglas previously had opposed military preparation on the part of the United States. In 1935, however, after hearing Benito Mussolini announce Italy’s invasion of hapless Ethiopia from the Piazza Venezia in Rome, Douglas had been shocked into the conclusion that “isolationism was impossible and pacifism self-defeating against dictators.” The Spanish Civil War and the sellout of Czechoslovakia at Munich fortified Douglas’s belief that the Neutrality Acts only benefited aggressor nations and that the United States and other democracies must resist totalitarian aggression, with military force if necessary.

With John F. Kennedy, St. Charles, Illinois, 1960: the end of a strenous day of campaigning.

Douglas, who had once opposed the Reserve Officers’ Training Corps, began to drill regularly with the volunteer Home Defense Unit at the University of Chicago. At the time, he was approaching his fiftieth birthday. He also became an active member of the Committee to Defend America by Aid to the Allies, known as the William Allen White Committee. In a debate with Norman Thomas‚ still a pacifist, isolationist, and the perennial socialist candidate for President‚ Douglas criticized both pacifists and isolationists for trying to avoid an unpleasant happening by burying their heads in the sand. He concluded: “Personal pacifism is impossible for any nation to follow.” He also acknowledged that aid to the Soviet Union was necessary to insure Hitler’s defeat, but added, “It is no merit on Stalin’s part that Hitler finally double-crossed his ally.”

In 1942 Paul Douglas tried to win the Democratic nomination for the United States Senate but failed to gain the support of the Cook County Democratic machine. In the primary election he carried ninety-nine out of 102 counties but lost Cook County and the primary election to Congressman Raymond S. McKeough (who was subsequently defeated by Senator Brooks, an unrepentant Republican isolationist).

He insisted, “We cannot let the isolationist minority treat F.D.R. after this war as they treated Woodrow Wilson after the first World War.” Douglas thereafter prevailed upon Navy Secretary Frank Knox (a former Chicago publisher) to permit him to enlist in the Marine Corps as a private. When discharged from service in 1946, Douglas was a wounded and decorated lieutenant colonel who had served heroically in the First Marine Division at Okinawa and Peleliu, where he was awarded the Purple Heart. He underwent five operations on his injured left arm, but its functional use was never restored. 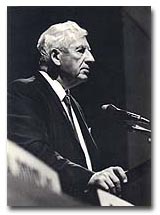 Speaking in Chicago during the last week of the 1966 campaign.

In his first postwar speech, having resumed his professorship at the University of Chicago, Douglas assumed the stance of an anti-Communist activist. He strongly opposed the expansionism of the Soviet Union and its ironclad control over Eastern Europe: “If the experience of the thirties with fascism has taught us anything,” he declared, “it was that it is a mistake to make great sacrifices of principle in order to appease aggression.” He stoutly defended the Marshall Plan, the Truman Doctrine, and the formation of a strong military alliance with Western European nations. When Henry A. Wallace became the presidential candidate of the Progressive party, Douglas denounced him for espousing an appeasement policy that “would permit Russia to take over all of Europe and much of Asia as well.”

By 1948 Colonel Jacob M. Arvey had succeeded Mayor Kelly as chairman of the Cook County Democratic organization and was willing to slate Professor Paul Douglas as the party’s senatorial candidate. This time, he defeated Senator Brooks. Thus, he began his eighteen-year Senate career as a true, regular Democrat. He spoke out forcefully for Truman’s containment policy and fought for the Fair Deal as he had for the New Deal.

When the United States became involved in the Korean War in 1950, Douglas applauded America’s military efforts on behalf of South Korea’s right of self-determination against the communist invaders from the north.

During Douglas’s three-term career—which spanned the presidential administrations of Truman, Eisenhower, Kennedy, and Lyndon Johnson—he was a forceful champion of civil rights, social welfare programs, public housing, extension of Social Security (including Medicare), federal aid to education, concern for the environment, and legislation beneficial to labor unions. Known as an uncompromising idealist, Douglas marched to his own drumbeat.

DOUGLAS, Paul Howard, (husband of Emily Taft Douglas), a Senator from Illinois; born in Salem, Essex County, Mass., March 26, 1892; attended the public schools of Newport, Maine; graduated from Bowdoin College in 1913, Columbia University in 1915; studied at Harvard University in 1915 and 1916; economist, author and college professor; taught economics at University of Illinois 1916-1917, Reed College, Portland, Oreg., 1917-1918; engaged in industrial relations work with Emergency Fleet Corporation 1918-1919; resumed teaching at University of Washington 1919-1920; professor of industrial relations, University of Chicago 1920-1949; between 1930 and 1939 served on many state and national commissions and committees; alderman, Chicago city council 1939-1942; unsuccessful candidate for nomination in 1942 to the United States Senate; during the Second World War served in the United States Marine Corps 1942-1945; enlisted as a private and rose to the rank of lieutenant colonel; elected as a Democrat to the United States Senate in 1948; reelected in 1954 and again in 1960, serving from January 3, 1949, to January 3, 1967; unsuccessful candidate for reelection in 1966; chairman, Joint Committee on the Economic Report (Eighty-fourth Congress), Joint Economic Committee (Eighty-sixth and Eighty-eighth Congresses); chairman of the President‚ Committee on Urban Affairs 1967-1968; chairman, Committee on Tax Reform 1969; resided in Washington, D.C., until his death there September 24, 1976; cremated; ashes scattered in the wooded area in Jackson Park, Chicago, Ill.