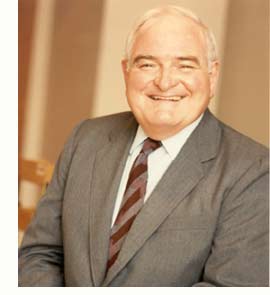 Dr. Paul E. Gray, former Chairman of the MIT Corporation (1990-1997), served as president of MIT from 1980-1990. As a member of both the faculty and the administration of the Institute, Dr. Gray served as associate provost, dean of engineering, and chancellor prior to becoming president. He earned the B.S., M.S., and Sc.D. degrees in electrical engineering from MIT. His areas of specialization are semiconductor electronics and circuit theory, and he has participated in the development of courses in electronics devices, models, and circuits, as well as core courses. At present, he teaches and advises undergraduates as Professor of Electrical Engineering and Computer Science.

Dr. Gray was involved in the establishment of the Institute’s Undergraduate Research Opportunities Program in which undergraduate students become working participants in research projects. For four years, Dr. Gray served as a member of the White House Science Council, also serving as a member of the Council’s Panel on the Health of Universities. He is director of the Boeing Company and Eastman Kodak Company, and a Life Trustee of the Boston Museum of Science. He is trustee emeritus of Wheaton College, where he was active as a trustee from 1971 to 1997 and was chairman from 1976 to 1987.

Dr. Gray is a fellow of the American Academy of Arts and Sciences, a life fellow of the Institute of Electrical and Electronics Engineers, a member since 1975 of the National Academy of Engineering.

—Courtesy of the MIT Alumni Association