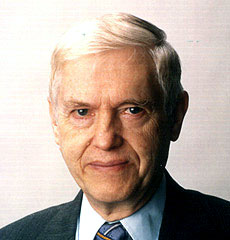 Owen Gingerich is a senior astronomer emeritus at the Smithsonian Astrophysical Observatory and Research Professor of Astronomy and of the History of Science at Harvard University. In 1992-93 he chaired Harvard’s History of Science Department.

Professor Gingerich’s research interests have ranged from the recomputation of an ancient Babylonian mathematical table to the interpretation of stellar spectra. He is co-author of two successive standard models for the solar atmosphere, the first to take into account rocket and satellite observations of the sun; the second of these papers has received over 500 literature citations.

In the past three decades Professor Gingerich has become a leading authority on the 17th-century German astronomer Johannes Kepler and on Nicholas Copernicus, the 16th-century cosmologist who proposed the heliocentric system. The Harvard-Smithsonian astronomer has undertaken a personal survey of Copernicus’ great book De revolutionibus, and he has now seen 580 sixteenth-century copies in libraries scattered throughout Europe and North America, as well as those in China and Japan. His annotated census of these books has been published as a 434-page monograph. In recognition of these studies he was awarded the Polish government’s Order of Merit in 1981, and more recently an asteroid has been named in his honor.

—From History That Matters