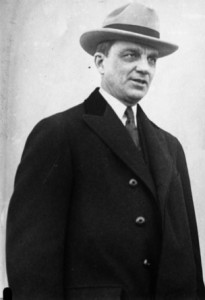 In 1896 Young joined the Boston Law office Charles H. Tylor and within a few years he became a partner and came to the attention of Charles A. Coffin, the first president of General Electric. In 1913, Charles Coffin invited Young to became General Electric’s chief counsel and vice president in Charge of Policy, an invitation Young accepted. In 1898, Young married Josephine Sheldon Emdonds, an 1896 Radcliffe College graduate, who born him five children: Charles, John, Josephine, Philip, and Richard.

In 1919, at the request of the government, Young created the Radio Corporation of America to combat threatened foreign control of America’s struggling radio industry during World War I. In doing so, Young helped establish America’s lead in radio and later television technology. He foresaw the necessity for a national communications network decades before others. In 1939, RCA demonstrated television for the first time at the New York World’s Fair.

In 1922, Young became GE’s president and chairman. He served in that position until 1939. Under Young’s leadership, General Electric became a leader in the manufacturing of home appliances and the electrification of rural America. This required the extension of GE’s advertising, marketing, distribution, and service facilities. Young’s diversification of General Electric improved the general welfare of GE workers and helped to cushion General Electric from the blows of the Depression.

Young participation in President Woodrow Wilson’s Second Industrial Conference following World War I marked the beginning of his counseling of five U.S. Presidents. Young served as a member of the German reparations commission in 1924, which drafted the Young Plan for handling reparation payments. In 1929, Time Magazine named Young its Man of the Year for his “Young Plan.” In selecting a Man of the Year in 1929 Time magazine declared, “The discerning citizen would pause long before putting any of them [the other contenders] ahead of Owen D. Young, apparently the one man, who could and did perform the year’s largest politico-economic job for the world’s leading nations.”

From 1924 through 1932 his name figured prominently as a possible Democratic nominee for President of the United States, but he always declined and favored his friend Franklin Delano Roosevelt.

Moreover, Owen D. Young was instrumental in plans for a state university system in New York. He was a member of the New York State Board of  Regents, the governing body of New York’s educational system, and he headed the state commission that laid the groundwork for the State University System of New York.

Owen D. Young never forgot about his community roots. In 1930, he built the Van Hornesville, New York, Central School to consolidate all the small rural schools near his hometown and improve primary education. Young wanted the school to be a model of city and country advantages for rural education.

In 1939, Owen Young retired as president and chairman of General Electric. At his retirement, Young’s General Electric was one of the top 30 companies traded at the London Stock Exchange. Young peacefully returned to his family farm in New York, which in every real sense was very much still his home.

Today, General Electric is ranked as the world’s second largest company with over 287,000 employees worldwide and the fourth most recognized brand in the world.

Young died on July 11, 1962 at 88 years old. A devoted lifelong Universalist, today the peace tower at the Universalist National Memorial Church in Washington D.C. is named in Young’s honor.

Young’s accomplished life attracted the attention of noted Abraham Lincoln biographer, Ida M. Tarbel. In 1932, she wrote her biography of Young titled, Owen D. Young: A New Type of Industrial Leader, in which she looked forward to a new type of business leader, who was an industrialist, lawyer, and diplomat.

Josephine Young Case, the daughter of Owen Young, along with her husband Everett Needham Case also penned a biography of her father titled, Owen D. Young and American Enterprise: A Biography. Josephine Young Case was a poet and the first women to be a director of the Radio Corporation of America, which had been organized by her father. Josephine’s biography describes her father as one of the major exemplars of the socially conscious business outlook. In reviewing the book, Foreign Affairs magazine wrote, “Owen D. Young rose from poor New York farmboy to preeminence as chairman of General Electric and respected international financial statesman. This stately and untroubled biography by his daughter and son-in-law describes Young’s intelligence, energy, integrity, and serenity. This is a story of an era which, despite wars and depression, did produce leaders devoted to family, community, and nation.”

Owen D. Young’s most important legacy was his efforts to use corporate power for socially progressive purposes. Owen D. Young was not only at the center of the technological and material innovations of his time, but also of its progressivism and efforts to devise private sector alternatives for the liberal state, the interventionist diplomatic establishment, and the activist community government.