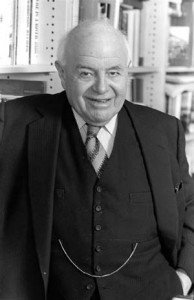 Pulitzer Prize winner Oscar Handlin ranks as one of the most prolific and influential American historians of the twentieth century, with pioneering works in the fields of immigration history, ethnic history, and social history.

Oscar Handlin was born on Sept 29, 1915. in Brooklyn, New York City, son of Russian Jewish immigrants. Handlin decided to become an historian at the age of eight. He graduated from Brooklyn College in 1934. Handlin taught at Brooklyn College from 1936-38, during which time he married Mary Flug, and began his long career on the Harvard University faculty in 1939.

Handlin’s dissertation was published in 1941 as Boston’s Immigrants, 1790–1865: A Study in Acculturation. The book was highly regarded for its innovative research involving sociological concepts, census data, and the previously untapped immigrant press; in 1941, the book won the prestigious Dunning Prize from the American Historical Association for being the outstanding historical work published by a young scholar that year.

Handlin was a prolific writer throughout his career. The Uprooted (1951) was awarded a Pulitzer Prize and added considerably to Handlin’s reputation. Opening with the now famous lines: “Once I thought to write a history of the immigrants in America. Then I discovered that the immigrants were American history.” It became his most famous book.

In 1954, the year he became a full professor at Harvard, Handlin was chief editor of The Harvard Guide to American History, which was quickly recognized as “one of the most authoritative bibliographic tools in the field of American history”; the same year, he published a history of American ethnic groups, The American People in the Twentieth Century, tracing the history of racist thought in the early 1900s, and a history of Jews in America, Adventure in Freedom: Three Hundred Years of Jewish Life in America, which among other things demonstrated elements of anti-Semitism in the early 1900s Populist movement.

By the late 1950s Handlin was publishing a book almost yearly, with works in the fields of civil rights, liberty, ethnicity, urban history, the history of education, foreign affairs, migration, biography, adolescence, even a book of poetry. Sometimes he wrote collaboratively with Mary Flug Handlin and, after her death in 1976 and his second marriage a year later, with Lilian Handlin. In the 1960s, Handlin produced 11 books (including the controversial Fire Bell in the Night: The Crisis in Civil Rights), wrote a monthly book column for the Atlantic Monthly, directed the Center for the Study of Liberty in America, helped manage a commercial television station in Boston, chaired a board that oversaw Fulbright Scholarship awards—all this in addition to his teaching duties at Harvard. From 1979–1983, he was director of the Harvard University Library. He also edited a 42-volume collection of books on subjects relating to immigration and ethnicity, The American Immigration Collection (1969).

During the next three decades, Handlin wrote 12 more books, many on the subject of liberty, and edited at least 20 biographies. He continued his work with immigrants with From the Outer World (1997), which collected the travel accounts of visitors to the United States from non-European countries.

—Abridged from the Encyclopedia of World Biography

Click here for supplemental reading about Oscar Handlin on Amazon.