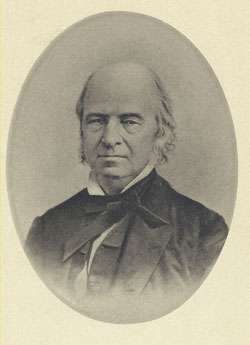 Orville Dewey was born in 1794 in Sheffield, Massachusetts. His father was a farmer, and both his parents were children of the first settlers of the place. It was, in his childhood, a quiet, homely village of the primitive New England type, with one wide grassy street, and scattered houses on either hand, with vegetable gardens beside them, and lilacs almost as tall as the houses shading the doors, and a rustic wealth of roses and peonies and hollyhocks under the windows. Here he passed his boyhood, the eldest of a family of seven, working on the farm in summer and going to the district school in winter. He was naturally thoughtful, and was encouraged in his love of reading by his father, a man of strong though untrained mind, a lover of poetry and of eloquence. His mother’s simple, genuine piety was another powerful influence in the formation of his character; and to these may be added the strict Calvinism which was the only form of religious life around him, and the interest taken in him by Paul Dewey, an elder cousin of his father, a mathematician, a keen thinker, and a skeptic in regard to the prevailing theology.

His parents, not without effort and self-denial, sent him to Williams College, where he graduated in 1814, with the first honors of his class, although suffering from weakness of the eyes caused by reading too soon after the measles. It was while at college that religious ideas, which had always been interesting to him, but heretofore tinged with the deepest gloom, became irradiated in his mind by the divine love and goodness, till they made his chief delight; and the desire arose in his heart to be a preacher, and convey to other souls the comfort and joy which filled his own. But the state of his eyes rendered study impossible, and for two years he tried school-keeping in Sheffield and business in New York, till the desire for his chosen work determined him to try to prepare himself to preach without notes; and, being still Calvinistic in doctrine, he went to Andover and entered the Theological Seminary. There he spent upon Hebrew all the time that he could read, and was helped in Greek by the brotherly kindness of his roommate; and, to use his own words,

The being obliged to think for myself upon the theological questions that daily came before the class, instead of reading what others had said about them, seemed to me not without its advantages.

Three years at Andover had two noteworthy results. His eyes were restored by a simple and judicious treatment with cold water, and his faith in the dogmas of the popular theology was completely shaken. Leaving the seminary in this unsettled state of mind, he preached for nearly a year in behalf of the American Education Society, and then received a call to Gloucester, Massachusetts. In answer to this he frankly declared his position, and the invitation was changed into one for a year, at the end of which time church and minister might know their own minds clearly. The proposition was acceptable, giving him opportunity for patient and prayerful examination of his difficulties. That year in Gloucester was the turning-point in his career. With earnest wrestlings of spirit, with solemn devotion to the truth as he was able to perceive it, he won his way to convictions that never afterwards faltered, of the unity of God, the dignity of human nature, and of the eternal progress of mankind towards virtue and happiness. At the end of the year the young minister was an avowed Unitarian, and the society was about equally divided in opinion. Meanwhile his remarkable powers must have become known, for he was immediately asked to come to Boston and assist in Dr. Channing’s pulpit; and this he did for two years, preaching on alternate Sundays when Dr. Channing was at home, and taking the whole charge while he was in Europe. The intimate companionship into which he was thus brought with that great and good man was one of the most highly prized blessings of his life, and the friendship then formed was interrupted only by the death of the elder.

In 1820, just before going to Gloucester, Mr. Dewey was married to Miss Louisa Farnham, daughter of William Farnham, of Boston. In 1823 he accepted a call to New Bedford, Massachusetts, and went with his family to make his home in that beautiful Quaker town, among a people of uncommon refinement and kindness, where he was happy, useful, and appreciated. But it was then a lonely post, and he was a zealous worker. Few exchanges were possible, and two new sermons must be written for every Sunday; and he was at the same time a constant contributor to the Christian Examiner. Under the unbroken strain the working power of his brain gave way, and after ten years he was forced to take absolute rest. He went to Europe for a year, but on his return attempted in vain to resume his work, and, resigning his parish, withdrew to Sheffield, feeling as if, at forty, his active service was over.

But the Second Unitarian Church (Church of the Messiah) in New York, whose call he had already refused while in New Bedford, now urged him anew to come to them; and, after a period of rest and fortified with a stock of sermons ready prepared, he consented, and in November, 1835, was installed as their pastor. With them he remained for six years more of happy labor, during which he received the degree of D.D. from Harvard College, and then again the physical organ of thought gave way, and he was obliged to pause and rest it. This time he went to Europe with his family, and was gone two years. It gave him great but temporary relief; and in 1848 he resigned his pulpit, and retired again to his country home, where his mother still lived.

In a sermon preached at the fifty-fourth anniversary of the founding of the Church of the Messiah, Dr. Bellows said:

Dr. Dewey’s nature was characterized from early youth by a union of massive intellectual power with an almost feminine sensibility; a poetic imagination with a rare dramatic faculty of representation. Diligent as a scholar, a careful thinker, accustomed to test his own impressions by patient meditation, a reasoner of the most cautious kind, capable of holding doubtful conclusions, however inviting, in suspense, devout and reverent by nature, he had every qualification for a great preacher in a time when the old foundations were broken up and men’s minds were demanding guidance and support in the critical transition from the days of pure authority to the days of personal conviction by rational evidence; and no exaltation that the Church of the Messiah will ever attain can in any probability equal that which will always be given to it as the seat of Dr. Dewey’s thirteen years’ ministry in the city of New York.

In his retirement he was asked to give a course of twelve lectures before the Lowell Institute, and spent two or three years in preparing them, choosing for his subject the design and end of Providence in this world. These lectures, after being heard with great interest in Boston, were delivered in all the principal cities of the country, and finally published with the title Problem of Human Destiny.

In 1858 he took temporary charge of the New South Society in Boston, worshipping at Church Green, now swept away with many another old landmark. In 1862 he returned to Sheffield, and there passed the rest of his life, watching with the deepest interest the world from which he was withdrawn, sending out now and then words of warning or of encouragement from his retirement, occupied with his little farm, with books and with meditations upon those loftiest themes of human thought which had always made the joy and the business of his mind. Mr. O. B. Frothingham wrote of him:

He was a most deep-feeling man. He loved his friends in and out of the profession, with a loyal, hearty, obliging, warm, and even tender emotion, expressing itself in word and deed. It was overflowing, not in any sentimental manner, but in a manly, sincere way. He was a man of infinite good-will, of a quite boundless kindness. His voice, his expression of face, his smile, the grasp of his hand—all gave sign of it. He felt things keenly; his sensibilities were most acute; even his thoughts were suffused with emotion.

For the last five years of his life he was an invalid—not suffering much pain, but growing more and more infirm, and losing the enjoyment of the senses and bodily powers that had been so strong and keen. It seemed a kind and gentle weaning from a world which had been so full of happiness to him that, when seventy, he said he should be willing to lead his life directly over again. His mind was clear till within three days of his departure, and he frequently expressed an earnest desire for death. The final and gracious gift came at last, and he sank quietly away, March 21, 1882, within one week of his eighty-eighth birthday.