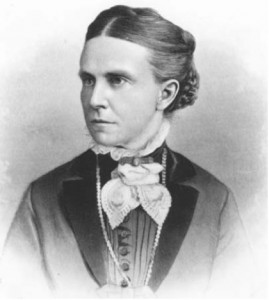 The first woman to be ordained with full ministerial standing recognized by a denomination, Brown was a pioneer preacher and woman’s rights advocate. She was born on January 5, 1835 in Prairie Ronde, Kalamazoo County, Michigan to Asa and Lephia (Brown) Brown, the eldest of four. Her parents had moved to their log cabin home from Vermont. They had encouraged Olympia to be educated, and she attended an academy in Schoolcraft, Michigan. Then her parents sent her to Mt. Holyoke Female Seminary in 1854, but she found it too orthodox, having been brought up Universalist. Fortunately, she was able to transfer to Antioch College, the new liberal school in Yellow Springs, Ohio. The whole family eventually moved there, and Brown’s siblings also attended Antioch.

Brown reported that the famed Unitarian educator Horace Mann was somewhat reticent about the prospects of women entering the professions. While she was at Antioch Antoinette Brown Blackwell came to preach and this inspired Brown to pursue the ministry. She wrote to all the theological schools after graduation, but received little encouragement. After Meadville rejected her, Ebenezer Fisher, the president of Canton Theological School at St. Lawrence University said that he would admit her, but he did not favor the idea of women preachers. Fisher was surprised when Brown entered seminary, was able to do all the work, and when she was done, applied for ordination. Again, his plan was to oppose the ordination. Yet the parish in Heuvelton wanted to call her to the ministry of their church, and they also had a member on the ordaining council of the St. Lawrence Association. The Association approved of Brown, and she was ordained on June 25, 1863, with Dr. Fisher taking part in the historic ceremony.

Her political activity on behalf of women began during her years in Ohio, when in 1860-1861, she circulated a petition seeking changes in the law for more rights for married women, which went before the Ohio legislature. After graduation Brown went to serve the church in Marshfield, Vermont, but she only stayed a few months before returning to Kalamazoo to care for her brother who was ill. In 1864 she was called to serve the church in Weymouth, Massachusetts. She took elocution lessons to improve her voice. She later remembered this pastorate, where she remained for six years, as her most enjoyable. During this time she took a four-month leave of absence to go on a tour of Kansas to advocate for a suffrage amendment to the state constitution. Although the amendment failed, Susan B. Anthony called it a victory in defeat. 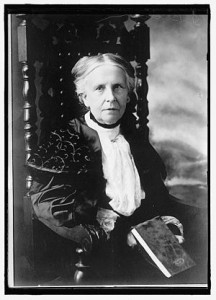 In 1870 Brown was called to serve the Universalist Church in Bridgeport, Connecticut. She later reported that she “preached better during my Bridgeport pastorate than at any other time of my life.” Here her most famous parishioner and ardent church supporter was P.T. Barnum who she said “was very friendly to me and often made some complimentary remark. . . ” (Willis, ed., Autobiography, p. 40). Although the church improved its previously saddened state and broadened its vision, a small faction opposed Brown’s ministry, including her advocacy of suffrage, and she was forced out. During her ministry in Bridgeport, she was married in 1873 to John Henry Willis, but kept her own name. The couple had met in Weymouth, where he was a member of her church board. They had two children Henry and Gwendolen, who edited her mother’s autobiography. After that Brown moved on to the Universalist Church of the Good Shepherd in Racine, Wisconsin, where she stayed for nine years. At that time she resigned to devote herself to suffrage work. She was president of the Wisconsin Woman Suffrage Association for more than thirty years.

In 1893 Brown’s husband died, and she managed his business, the Racine Times Publishing Company, until 1900 when it was sold. Brown was able to perform some part-time work in churches, and did so in Columbus, Neenah, and Mukwonago, all in Wisconsin. Much effort went into the campaign for woman suffrage in Wisconsin, but the amendment to the state constitution failed to pass in 1912. After this the tide began to shift nationally, and several states voted in suffrage, with the final national victory in 1920. At the age of 85, Brown cast her first ballot on November 2, 1920. She was one of the few long-term suffrage advocates to see the fruits of all her labors.

After 1914 she began to spend winters with her daughter in Baltimore, and she died there on October 23, 1926, but was buried back in Racine. Throughout her life, Brown encouraged young women to enter the ministry, and many did, following Brown’s example of devotion to liberal religion and advocacy of women’s rights.

The Autobiography of Olympia Brown