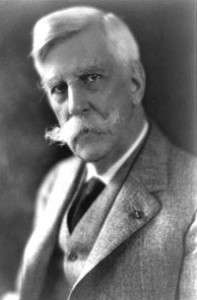 The grandson of the Rev. Abiel Holmes and son of the poet, Dr. Holmes, responded to the call of President Lincoln for 75,000 volunteers during the Civil War. Captain Holmes was wounded three times, two almost fatally. Upon recovering, he and William James spent long nights discussing their “dilapidated old friend the Kosmos.”

After studying and practicing law, he published his Lowell Lectures, The Common Law, long cited as the greatest work of American legal scholarship. His first sentence is, “The life of the Law has been not logic but experience.”

Following his twenty years service as a member of the Supreme Judicial Court of Massachusetts, President Theodore Roosevelt appointed him to the U. S. Supreme Court, a post held for thirty years before retirement at the age of ninety-one.

“The Great Dissenter” was buried with his wife, Fanny Bowditch Dixwell, at the Arlington National Cemetery.

The Biography of Oliver Wendell Holmes

The Church in Harvard Square: The Reverend Mr. Holmes