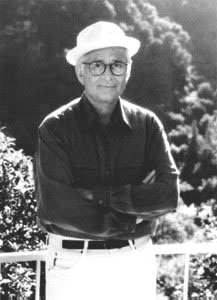 Norman Lear had one of the most powerful and influential careers in the history of U.S. television. In 1970, Lear moved into television. While in England Lear had seen a comedy, Till Death Us Do Part, which became an inspiration for All in The Family. ABC was interested in the idea and commissioned a pilot, but after it was produced the network rejected it, leaving Lear with a paid for, freestanding pilot. He took it to CBS, which had recently brought in a new president of the network, Robert Wood. The timing was fortuitous. Anxious to change the bucolic image cast by shows like The Beverly Hillbillies, Wood reacted positively to Lear’s approach and gave Tandem a green light.

All in the Family first aired on 12 January 1971. Wood commented in a 1979 interview that CBS had added several extra phone operators to handle an expected flood of reactions. They never came.

The series did, however, attract its share of protests and strong reactions. Over its early life there were a continuous flow of letters objecting to language and themes and challenging Lear for his “liberal” views. Looking back in 1979 Lear remarked that he responded to such criticism by stating, “I’m not trying to say anything. I am entertaining the viewers. Is it funny? That was the question.” Later, when attacks on the show asked how he dared to express his views he altered his response: “Why wouldn’t I have ideas and thoughts and why wouldn’t my work reflect those ideas?” And of course they did.

In 1982 he founded People for the American Way to speak out for Bill of Rights guarantees and monitor violations of constitutional freedoms. By 1996 the organization had become one of the most influential and effective voices for freedom. Probably, however, no single individual has had more influence through the medium of television in its 50-year history than Norman Lear.

—Courtesy of the Museum of Broadcast Communications