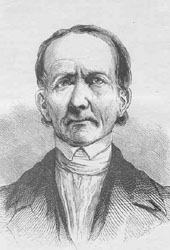 The Universalist preacher who was called “the Ballou of New York and Pennsylvania,” was born in New Salem, Massachusetts on December 2, 1778, the son of Rufus and Anna (Day). At fourteen he became an apprentice to a blacksmith, but after a long illness, he decided that he was not fit for a life of manual labor. In 1797 he entered New Salem Academy, and he spent some time teaching before hiring on as a clerk in Dana, Massachusetts. Stacy’s parents had been Universalists in Gloucester, but became “half-covenant” members in New Salem. As a child Stacy was not aware of their faith, but later “strange preachers of a strange doctrine” came to town, and caused “considerable excitement, and called forth all the bitter censures, denunciations, and condemnations of the standing order.” Stacy had embraced Universalism as a religion of “youthful vivacity” by the time he moved to Dana, and there he fell under the influence of Hosea Ballou, who centered his circuit-riding ministry in that town. Ballou became his mentor, and encouraged Stacy to become a minister. One Sunday in October 1802, Ballou feigned a headache, and told Stacy he must preach in his place: “You may say just what you please, and I’ll get up and prove it all true, by Scripture.” After Stacy conducted the service with “quaking knees and quavering voice,” Ballou delivered a closing prayer, and Stacy “heard no more of Mr. Ballou’s headache” (Stacy, Memoirs, pp. 71-73). Stacy became an advocate of “God’s Universal Grace,” and promised “to defend the truth against the attacks of its enemies.” He wrote that the first lesson he learned in this new school was that, “the salvation of all was just as secure as the salvation of the Calvinistic elect. . .” The belief that all would be saved, “removed all slavish fear, and filled my soul with “joy unspeakable” (Memoirs, p. 466).

Soon thereafter, Stacy began itinerant preaching in Vermont. He was fellowshipped in September 1803, and ordained in Westmoreland, New Hampshire in 1804. Stacy was a strong supporter of the Winchester Profession feeling that a confession of faith helped to legitimize the legal status of Universalists, saying it “was absolutely necessary to save Universalists in New England, and particularly in New Hampshire, from Clerical oppression.” He married Susan Clark of New Salem in 1806. They had eight children; three sons and five daughters. In 1805 Stacy began preaching in New York, with Brookfield as his headquarters. In April 1808 he accepted a call to the church in Hamilton, New York, where he remained for twenty-two years. He served briefly as a chaplain during the War of 1812.

A leader in organizing and spreading Universalism in New York, Stacy founded the Chenago and Black River Associations (1823), and proposed the idea of starting a New York State Convention, and later took part in its creation in 1825. In his Memoirs, he wrote “In the State of New York, I have witnessed its first breathings, its infantile struggles, its youthful fears and hopes, and ardent longings and anticipations, until it assumed a manly dignity”(Memoirs, p. 348). Stacy claimed that within less than twenty-five years the number of Universalist societies had grown from two to two hundred. The end of his tenure in Hamilton was unhappy, as an anti-Masonic group created some tensions within the congregation, and Stacy decided it would be better to move on. From 1830 to 1840 he traveled through Ohio, Michigan and Pennsylvania, starting in Columbus, Pennsylvania, where he organized the church, and was its first minister. From 1835-1840, he was pastor in Ann Arbor, Michigan, the first settled Universalist in the state, but he felt constrained to leave there due to financial difficulties. After a return call to Columbus in 1841, he continued to further the cause of Universalism in western Pennsylvania. In 1859 the Universalist societies there were formed into the Stacy Association. This five foot, one hundred pound, diminutive and modest man became a legend for his fortitude in organizing rural societies with constant itinerant preaching, traveling by day and preaching at night, spreading the gospel of Universalism. He wrote, “My travels, in all seasons, through all kinds of roads, amid all sorts of weather, and amidst almost all the variety of character that human nature is capable of sustaining, have been excessively fatiguing” (Memoirs, p. 349). Despite the strain, Stacy’s health remained vigorous throughout a career that stretched from the Atlantic Ocean to the Great Lakes and back. He wrote that he was never “so happy as when proclaiming . . . and defending, with all the efforts of my feeble talents, the GREAT SALVATION” (Memoirs, pp. 17-18). He died on April 7, 1868 in Columbus.