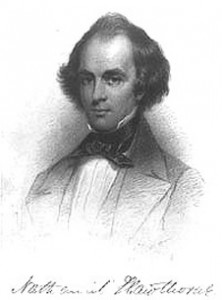 When struggling to become a self-supporting writer, Hawthorne accepted an American magazine position promising $500 per year. After six issues, the publisher declared bankruptcy and provided only $20. Income from a job of measuring salt and coal in the Boston Custom House was invested in the Brook Farm utopia which also failed, as narrated in his book, The Blithedale Romance.

After the successful publication of Twice-Told Tales, Hawthorne married Sophia Amelia Peabody and moved to Concord, where among their friends were included Ralph Waldo Emerson, Henry David Thoreau, and Margaret Fuller.

After three distracting years working as a surveyor of the Salem Custom House and the disturbing death of his mother, he was prodded to write his probing first novel, The Scarlet Letter, portraying a proud adulteress condemned to wear a scarlet A on her dress. Herman Melville dedicated Moby Dick to Nathaniel Hawthorne, thereby publicly recognizing his genius.

A college friend, President Franklin Pierce—whose political biography Hawthorne had written—appointed him consul to Liverpool, England. Upon returning home to Concord seven years later, his health deteriorated. He was buried in 1864 in the Sleepy Hollow Cemetery. Now his labor of love is celebrated in a handsome two volume set of his writings issued as part of The Library of America.