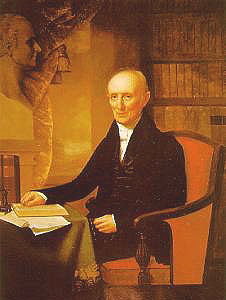 Courtesy of the Peabody Essex Museum.

After becoming the head of the Essex Fire and Marine Insurance Company in Salem in 1804, Bowditch became, until his death, actuary of the Massachusetts Hospital Life Insurance Company. Because this position provided him time for research and writing, he declined election as professor of mathematics and philosophy at Harvard, as well as offers from West Point and the University of Virginia.

His publications include The New American Practical Navigator (1802), still used for sea navigation, and his translation and annotation of La Place’s five-volume summary of the progress of astronomy, Traite de mechanique celeste.

He was elected as a foreign member of the Royal Society of London, president of the American Academy of Arts and Sciences, and fellow of the Harvard Corporation.