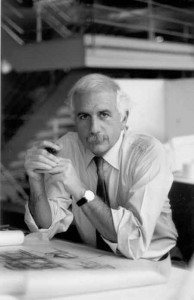 Just six years after earning a degree in architecture from McGill University in 1961, Moshe Safdie made a name for himself with his award-winning Habitat ’67 project. Other projects included the Western Wall Precinct Plan and Musée de la Civilization. A recipient of the highest honors in the field of architecture, he has written extensively on the subject and taught at Harvard, Yale, McGill, and Ben Gurion.

“The National Gallery is set on a promontory overlooking Parliament Hill and the Ottawa River. The museum celebrates a place of art in the capital skyline and is a counterpoint to the Gothic library of Parliament and Notre Dame Basilica. With the Parliamentary library a solid, richly articulated by its flying buttresses, the Great Hall of the National Gallery is a transparent crystal, a great urban room, a winter garden transforming into a candelabra in Ottawa’s long winter nights.”

—Courtesy of the Marcuse Corporation

The City After the Automobile: An Architect’s Vision by Moshe Safdie and Wendy Kohn