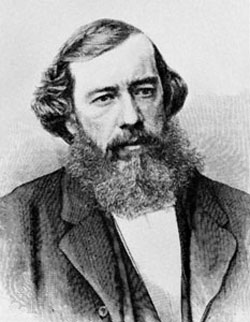 The Heralds of a Liberal Faith have been from time to time reinforced by recruits from unexpected sources and origins. Most of the men commemorated in this volume came from New England backgrounds and from families of the Puritan stock. Occasionally, however, there flashed across their skies a meteoric visitor from a very different heritage and endowed with a sparkling brilliancy. Moncure Conway was a Virginian. His father was a respected magistrate and a leader in the State Legislature. His mother was of the Daniel family prominent in the social and journalistic life of Richmond. All his associations and inheritances were conservative. Nothing in his surroundings and upbringing suggested change or novelty. He was born on the Middleton Estate in Stafford County on March 17, 1832. His early education was at Fredericksburg Academy, and from that school he went to Dickinson College, where he graduated in 1849. He started to study law at Warrenton, Virginia, and became a writer for the Richmond Examiner of which his cousin, John Daniel, was the editor. These writings avowed intense Southern sympathies and opinions, States’ rights, slavery, an established church, and all the rest. Then came the first of the sudden shifts that marked his subsequent career. He abandoned the law and enlisted in the Methodist ministry, a move which astonished his family and friends. He was promptly approbated and for two years served as an evangelist, first in the Rockville and then in the Frederick circuit in Maryland.

Then came another revolutionary change. He discovered that he was no longer in sympathy with the doctrines and disciplines of the Methodist Church. Breaking also from his Southern sympathies and associations, he betook himself to what for him was the almost foreign land of Massachusetts and enrolled as a student in the Harvard Divinity School. There he proved himself to be a brilliant scholar and an impassioned preacher. He not only assimilated progressive theological ideas but actually became an abolitionist. He graduated in 1854 and returned to Virginia hoping for a chance to preach his new-found gospel in his native state. He was met by an unbreakable hostility. His very life was threatened when it was revealed that in Boston he had befriended Antony Burns, a fugitive slave. He fled as far as Washington, where his exceptional gifts of animating speech were discovered by the people of the Unitarian Church. He was ordained as their minister on February 28. His stay, however, was short. He was too radical in his opinions and too vehement in the expression of them for that rather sedate congregation which included the families of some Southern Senators and Representatives. His impetuous sermon after the assault on his parishioner, Senator Sumner, was more than they could stand, and the connection of minister and parish was dissolved. Then a call came to him from the church in Cincinnati, and he had there a somewhat tumultuous but on the whole successful ministry of six years. His house and church became stations on the underground railway and he was instrumental in settling a colony of fugitive slaves, some of them from his own father’s plantation, at Yellow Springs, Ohio. There, too, he won fame as a lecturer and author. To have and hear a Virginian ardently advocating the Northern cause was exceptional and aside from the zeal of the speaker, had something dramatic about it. He wrote articles for papers and periodicals and published pamphlets and tracts which had wide circulation. In 1862 he resigned his charge and gave his whole time and strength to the antislavery cause. For a while he was back in Massachusetts, editing The Commonwealth and meeting speaking appointments every evening. Then he must needs go to England to explain what the North was fighting for and to enlist the sympathy and support of British public opinion. Soon he was invited to become the minister of the South Place Society in London, and there his restless spirit found stability and harmony. He stayed for twenty years, preaching to enraptured congregations and was a frequent contributor to the newspapers and the major magazines in both England and America. He started many insurrections in complacent minds. He was forever championing unpopular causes and never quite content if he found himself in a majority. A succession of books, too, came from his study table, travelogues full of keen observations and enlivened by a rather caustic wit; acute analyses of social and religious movements and trends; critical dissertations on current political issues; a biography of Thomas Carlyle and a Sacred Anthology, a collection of the sayings of the seers of all races and ages. A few of the titles will indicate the diversity of his interests: South Coast Saunterings in England, Testimonies Concerning Slavery, Republican Superstitions, Demonology and Devil Lore, A Necklace of Stories, The Wandering Jew and the Pound of Flesh. In 1884 he returned for a while to America, but he now felt more at home in England and went back to London for another term of service at the South Place Chapel. In 1904 he completed and published his two-volume Autobiography: Memories and Experiences, the record of a singularly varied and vivid career.

Moncure Conway possessed what has been justly called “a soul of flame.” His discovery of a liberal interpretation of religion transformed and transfigured him. Wherever there was a fight for freedom or against oppressions and tyrannies he wanted to be in it. He refused to accept or tolerate any doctrine that was repulsive to his moral sense or which seemed to him artificial or mechanical. He stood in the procession of the prophets in their passion for justice and righteousness. He seldom practiced self-control when confronted with men whose beliefs and methods he disliked. His preaching was provocative, the style as biting and incisive as the thought. He had no use for the conventional rhetoric of the pulpit or for a pious vocabulary. He did not argue, he proclaimed. He was no trimmer, anxious to offend no one. He often incurred the wrath of organized iniquity and was the target for virulent abuse. Like all such vivid natures he was subject to occasional moods of depression, but for the most part he radiated force and fire.