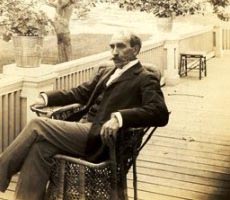 One of the great preachers and published voices of Unitarianism, Savage was born on June 10, 1841, in Norridgewok, Maine, the youngest of four children. His brother William H. was also a Unitarian minister. Due to ill health he never received much formal education, but he taught briefly after high school. Then he attended seminary in Bangor, having been brought up in a conservative Congregational church, and experiencing a teenage conversion. He took time off one summer to be a chaplain in the army, but returned to graduate in 1864. Savage married Ella August Dodge, with whom he sailed for California. He served as a missionary in San Mateo and Grass Valley, but returned East to help care for his parents. He settled in Framingham, Massachusetts for two years, but then moved on to Hannibal, Missouri, where his brother William was already settled. Here he began to revolt against what he perceived as the cruelty of God, and the infallibility of scriptures. Before he left Congregationalism, he converted to the science of Darwin. William, who later became a Unitarian minister, too, helped Minot in his search.

In 1873, Minot published Christianity, the Science of Manhood, and that was followed three years later with The Religion of Evolution. Later Savage would argue for belief in a “God who is in and through nature,” and does not interfere with natural processes. By now he knew that Christianity was only one part of religious truth. No longer able to abide Congregationalism, he accepted a call to Third Unitarian Church in Chicago, still unsure if he was a Unitarian or not. Here he came to know Robert Collyer, and his friendship with Lucretia Mott helped make him an abolitionist. Savage had stayed only briefly in Chicago when he received a call to Boston’s Church of the Unity in 1874, where he remained for 22 years. He became known as a great preacher and lecturer, and volumes of his sermons were published. He would stand in front of the pulpit and speak without notes before throngs of a thousand and more, but after he left the church soon died.

By the 1890’s many of his congregation were beginning to move to the suburbs, and he was looking to go elsewhere. In 1895 Robert Collyer was pleading with Savage to come to New York and be his assistant. Called the most “representative mouthpiece of Unitarianism,” he decided a move to New York would be advantageous to his career. His fame grew even more, based primarily upon published sermons. As part of his definition of Unitarianism he said, “Character is no condition of salvation, it is salvation.” In 1895 he was made chairman of the National Conference, after he had helped revise the constitution.

At the famous meeting in Saratoga in 1894, Savage was responsible for helping define the statement of purpose that remained in use until 1959: “These churches accept the religion of Jesus, holding, in accordance with his teaching, that practical religion is summed up in love to God and love to man.” He had also been a board member of the American Unitarian Association (AUA). He received a D. D. from Harvard University in 1896, the same year he settled in New York.

Savage become deeply immersed in spiritualism later in life, especially after the death of his son Philip. In 1906 Savage’s health worsened, and he resigned form the Church of the Messiah in New York. His son Maxwell became a minister as well. He came to Boston for the May Meetings in 1918, and died at the Parker House hotel on May 22. One of the great preachers of the late 19th century, his attempt to reconcile evolution with religion was among the first to do so.