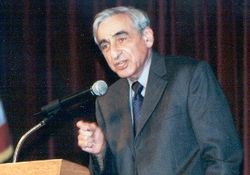 Michael Walzer is a political theorist and writer on society, politics, and ethics, currently working as a professor at the Institute for Advanced Study in Princeton, New Jersey. He has written on a wide range of topics, including just and unjust wars, nationalism, ethnicity, economic justice, criticism, radicalism, tolerance, and political obligation. Outside of his academic work he acts as editor-in-chief of Dissent, an American left-wing magazine, and is a contributing editor to The New Republic. He is also on the editorial board of the academic journal Philosophy & Public Affairs. To date he has written twenty-seven books and has published over three hundred articles, essays, and book reviews. He is a member of several philosophical organizations, including the American Philosophical Society.

Walzer is usually identified as one of the leading proponents of the “Communitarian” position in political theory, along with Alasdair MacIntyre and Michael Sandel. Like Sandel and MacIntyre, Walzer is not completely comfortable with this label. He has, however, long argued that political theory must be grounded in the traditions and culture of particular societies and opposed what he sees to be the excessive abstraction of political philosophy. His most important intellectual contributions include a revitalization of just war theory, that insists on the importance of ethics in wartime while eschewing pacifism; demands that each good be distributed according to its social meaning, and that no good (like money or political power) be allowed to dominate or distort the distribution of goods in other spheres; and an argument that justice is primarily a moral standard within particular nations and societies, not one that can be developed in a universalized abstraction.

Click here for supplemental reading about Michael Walzer on Amazon.