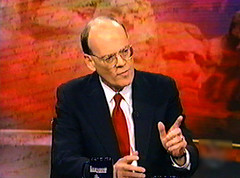 Michael Mandelbaum is Christian A. Herter Professor and Director of the American Foreign Policy Program at Johns Hopkins University. Mandelbaum received a Ph.D. in political science from Harvard University and has been on the faculty of Harvard University, Columbia University, and the U.S. Naval Academy. His publications include The Case for Goliath: How America Acts in the 21st Century (2006) and The Ideas That Conquered the World: Peace, Democracy, and Free Markets in the 21st Century (2002).

The Case for Goliath: How America Acts as the World’s Government in the Twenty-first Century by Michael Mandelbaum (2006).