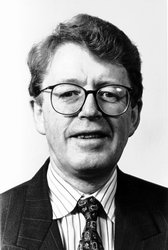 Professor McElroy studies changes in the composition of the atmosphere with an emphasis on the impact of human activity. He has spent a significant amount of energy addressing challenges for public policy posed by the rapid pace of industrialization in developing countries such as China and India, while exploring alternative strategies for more sustainable development in mature economies such as the United States.

Professor McElroy earned his B.A. in Applied Mathematics and his Ph.D. in Applied Mathematics from Queens University in Belfast, Northern Ireland. He has been a professor at Harvard University since 1970, the chairman of the Department of Earth and Planetary Sciences at Harvard University since 1986, and the chairman of the Harvard University Center for the Environment since 1991. He has worked as the Director of Harvard’s Center for Earth and Planetary Physics and as a physicist for the Kitt Peak National Observatory in Tucson, Arizona, from 1963 to 1970. In 1977 he became the co-founder and chairman of the Board of Atmospheric and Environmental Research Inc., of which he is still the director today. Professor McElroy is also on the Space Program Advisory Panel and the Environmental Task Force and is a member of numerous committees associated with the National Academy of Sciences and NASA.

Professor McElroy is the recipient of the James B. Macelwane Award by the American Geophysical Union for “outstanding contributions in the field of planetary sciences.”

Click here for supplemental reading about Michael B. McElroy on Amazon.