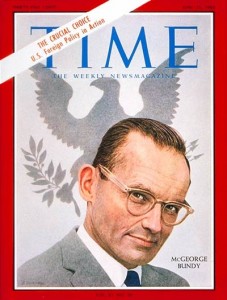 McGeorge “Mac” Bundy was United States National Security Advisor to Presidents Kennedy and Johnson from 1961-1966, and then headed the Ford Foundation from 1966-1979.

Raised in Boston, Massachusetts, he came from a prominent, wealthy family long involved in politics. His mother, Katherine Lawrence Putnam, was a child of two Boston Brahmin families listed in the social register. His father, Harvey Hollister Bundy, was from Grand Rapids, Michigan and was a diplomat who helped implement the Marshall Plan. McGeorge attended both the Groton School and Yale University one year behind his brother William Bundy.

He was one of Kennedy’s “wise men,” a noted professor of government—although not a PhD—at Harvard University. He moved into public life in 1961 becoming national security advisor. He played a crucial role in all of the major foreign policy and defense decisions of the Kennedy and part of the Johnson administration. These included the Bay of Pigs Invasion, the Cuban Missile Crisis, and, most controversially, the Vietnam War. From 1964 he was Chairman of the 303 Committee, responsible for coordinating government covert operations.

He left government in 1966 to take over direction of the Ford Foundation. From 1979 to 1989, he was Professor of History at New York University. He was scholar-in-residence at the Carnegie Corporation from 1990-1996.

The Color of Truth: McGeorge Bundy and William Bundy: Brothers in Arms