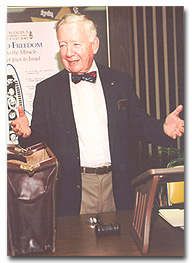 Born in 1921 in Watertown, Wisconsin, midway between Madison and Milwaukee, Gaebler attended Harvard College and the Harvard Divinity School. Ordained by the historic First Parish in Cambridge, Massachusetts, in March, 1944, and installed as minister to students, he developed a focus on campus ministry which remained high among his priorities throughout his career.

When Mr. Gaebler was invited to accept the Madison ministry, that congregation was still in the process of settling into its new meeting house, designed by its own member, the renowned architect Frank Lloyd Wright. Indeed Mr. Wright himself sprang from a Welsh Unitarian family, and his own parents had been among the organizers of the Madison congregation. His father, William Wright, had served as secretary of the congregation when it was organized in 1879.

The meeting house opened in 1951. By the summer of 1952, when the Gaeblers arrived, visitors were swarming in and around the building to an extent that made it difficult for the congregation to carry on the appointed functions. As the congregation grew into its world famous new meeting house, Mr. Gaebler notes that its location in a residential neighborhood near the campus drew many students and young families with children, while the architectural distinction of the building appealed to many because of its intrinsic aesthetic values. The congregation grew rapidly, and under the ministry of Mr. Gaebler’s successor, the Rev. Michael Schuler, it has become one of the three or four largest churches in the denomination.

Perhaps his most important denominational service, however, was his leadership in enlarging and structuring the relationships of the Unitarian Universalist Association with religious liberals all around the world. During a year’s leave of absence from the Madison congregation, he joined the UUA staff in Boston, organizing a Department of Overseas and Interfaith Relations. As director of that office he accompanied UUA President Dana Greeley on visits to liberal religious groups in Japan, the Philippines, India, and Europe. Their visit to the Unitarian Union of the Khasi Hills in the northeastern Indian state of Meghalaya (then still part of Assam) led to the development of a close and very fruitful relationship with this indigenous liberal movement. Their visit to Tokyo included the very first contact between American Unitarian Universalists and the Rissho kosei-kai (Buddhist).

On that same trip Gaebler and Greeley spent a week in Rome as guests of the Vatican during the early days of the second session of the Vatican Council. Relationships forged during that visit led Gaebler to an enduring involvement in broad ecumenical efforts, an involvement he continues vigorously through his activity in the Greater Madison Interfaith Association. In the course of that year he also represented the UUA in working with the secretariat of the International Association for Religious Freedom (IARF) on plans for that organization’s triennial Congress the following summer in the Netherlands. 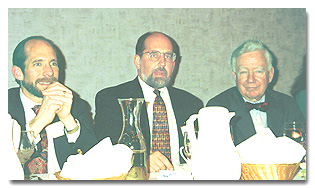 These international activities led to his being invited to spend another year’s leave of absence from Madison a decade later as an exchange minister with the Free Religious Congregations of Baden in southwestern Germany, a group whose origins are rooted in the German revolution of 1848. After the collapse of that 1848 effort to establish a liberal democratic regime in German, no fewer than one eighth of the total population of Baden emigrated to America. Some of them settled in Sauk City, Wisconsin, a scant 25 miles from Madison. There they founded a German Free Congregation which survives to this day, the only one remaining of the once widespread movement among the German “forty-eighters,” who came to America seeking political and religious freedom. Mr. Gaebler has maintained a close relationship with the Sauk City congregation, which did him the honor of inviting him to serve as their speaker, the term that congregation had applied to its only previous professional leader, Eduard Schroeter, who occupied that position for many years in the late nineteenth century. Following his retirement from the Madison ministry, Max served for a year as interim minister of the Unitarian Church of South Australia in Adelaide. Later he held similar positions for three months with the Unitarian Church of Auckland, New Zealand, and for a year with the Unitarian Church of Vancouver, British Columbia.

Yet another area of denominational life in which Max Gaebler played a central role arose out of the conflict engendered by the outbreak of the Black Power movement in 1968. Confronted by a Unitarian Universalist Black Caucus at its General Assembly in Cleveland that June, that UUA gathering was thrown into turmoil by the Black Caucus and its white support group. Reeling under the pressures of this highly charged situation, opponents of the separatist approach among both black and white delegates organized a biracial group committed to sustaining the denomination’s traditional commitment to integration. The organization which emerged was called Black and White Action (BAWA). Mr. Gaebler was chosen on the spot as cochair of BAWA, serving jointly with Dr. Glover Barnes, an African-American scientist who was at that time a professor at the University of Buffalo. This organization, which won recognition at the UUA General Assembly in Boston the following year, continued to carry a torch for racial justice in Unitarian Universalist circles for more than a decade. BAWA and the cause it represented became a central and defining element in Dr. Gaebler’s denominational activity. 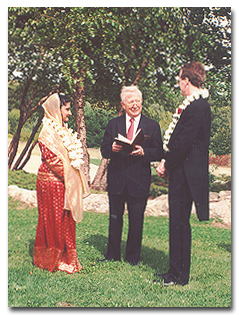 Max Gaebler presiding over one of some 2000 marriages.

These activities, however, were not the reason why Isthmus, the Madison weekly newspaper, chose him as one of Madison’s most influential citizens of the 20th century. Rather it was the magnitude and depth of his public ministry facilitated in large measure by the radio program sponsored by the congregation on Madison’s NBC station. The program had been initiated nine years before Gaebler’s arrival and had built a considerable following in those days before the advent of television. Broadcast at ten o’clock every Sunday morning, it provided a wide audience. He became a familiar voice, speaking not only on religious themes but on issues of current importance on the University of Wisconsin campus, in the Madison community, at the State Capitol, and on the national and international scene. He also interviewed important and interesting visitors, among them Wade McCree, one-time the UUA vice-moderator, who was then solicitor general of the United States; James T. Farrell, the well-known author of the Studs Lonigan novels; Norman Thomas; and both Hubert Humphrey and John Kennedy during the 1960 primary season.

During the turbulence on the University campus during the 1960’s Mr. Gaebler became a widely recognized and, at least in some quarters, much appreciated voice favoring open and inclusive debate while deploring and condemning organized efforts to prevent unpopular voices from being heard. On one occasion, when local campus disorders were attracting national media attention, the university’s radio station (now an important link in the PBS network) invited Mr. Gaebler to preside at an open mike for two hours of comment by any who wished to voice their opinions.

Gaebler strongly supported student efforts in the 1950’s (efforts that were ultimately successful) to abolish compulsory ROTC. Interestingly, when a group of students twenty years later sought to persuade the University Regents to abolish ROTC altogether, Mr. Gaebler appeared before the Regents to support the continuing presence of the ROTC as a voluntary option. 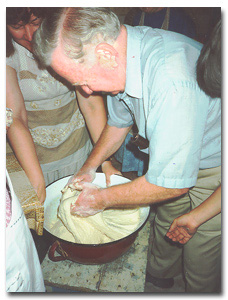 The Civil Rights movement, issues of University governance, the role of intercollegiate athletics in university life, and many other themes appeared on “Religion for Today.” For many years Gaebler devoted the last Sunday in December to speaking against capital punishment, a practice Wisconsin had rejected soon after achieving statehood and has never reinstated.

“Religion for Today” also provided an opportunity to give wider voice to his interest in religious ecumenism. He honored important anniversary celebrations of Lutherans and Moravians, and he spoke often of the deep impact of Vatican II on his own religious outlook.

These broad concerns were evident in Gaebler’s deep involvement in many community issues. He was president of the Wisconsin Association for Mental Health when that organization was deeply involved in the ultimately successful effort to launch a children’s treatment center as part of the state’s mental health program. And over the years he devoted a great deal of time and attention to a wide range of community agencies and organizations. Among them were such groups as the Dane County Social Planning Agency, the Madison Community Welfare Council, the Max Kade Institute for German-American Studies, and the Ethics Committee at the University Hospital.

Max Gaebler has been honored by both Unitarian Universalist theological schools, having been awarded an S.T.D. degree by the Starr King School for the Ministry in Berkeley, California, in 1968 and a D.D. degree by Meadville/Lombard Theological School in Chicago in 1975.

Information about the Madison Congregation

Gambler, Max. Landmark in the Life of the First Unitarian Society of Madison. Madison: Friends of the Meeting House, 1999.