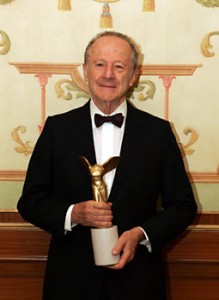 Matthew Meselson, a Harvard molecular biologist whose famous experiment substantiated the newly discovered double-helix structure of DNA and who prompted the United States to drop its biological and chemical weapons programs, has won a Lasker Award, a scientific honor sometimes referred to as “America’s Nobel.”

Meselson won the Lasker Award for Special Achievement in Medical Science “for a lifetime career that combines penetrating discovery in molecular biology with creative leadership in public policy aimed at eliminating chemical and biological weapons,” according to the citation.

“In the early days of molecular biology, Matthew Meselson laid the biochemical groundwork for several key areas: DNA replication, DNA repair, DNA recombination, and DNA restriction,” says a statement from Joseph Goldstein, chair of the Lasker jury committee and a Nobel laureate at the University of Texas Southwestern Medical Center at Dallas.

Goldstein singled out a 1958 paper. It describes what others have called “the most beautiful experiment in biology.” In it, Meselson and Franklin Stahl, a postdoctoral fellow at the California Institute of Technology, reported that DNA replicates itself by making new double-stranded twins, each containing one strand of the original parent molecule and one newly formed strand. The findings substantiated Watson and Crick’s proposed mechanism and their double-stranded helical model of DNA.

Soon after he came to Harvard, Meselson embarked on what became a 40-year campaign to prevent the production and use of biological and chemical weapons. It began in 1963 when he was invited to spend a summer at the U.S. Arms Control and Disarmament Agency in Washington. He found a large development and production program in biological weapons, which was potentially devastating built relatively inexpensive.

In another international mystery of the Cold War era, Meselson led a team to Russia in 1992 and 1993 to determine the cause of a 1979 anthrax epidemic that killed more than 60 people in Sverdlovsk. For years, the Soviets blamed tainted meat, which Meselson had described as plausible in Congressional testimony. But he insisted an on-site inquiry was needed. After repeated attempts to bring independent investigators to Sverdlovsk, Meselson and his wife, medical anthropologist Jeanne Guillemin, were allowed to lead a team to probe the cause of the epidemic. After many interviews with victims’ families, it became clear that nearly all of the people who died worked or lived within a long narrow zone downwind of a military microbiological facility suspected of developing biological weapons. With local meteorological records, Meselson pinpointed the day the germs escaped.

Click here for supplemental reading about Matthew Meselson on Amazon.