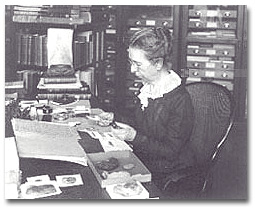 Dr. Mary Jane Rathbun, honorary associate in zoology at the U.S. National Museum since November, 1915, died at her home in Washington, D.C., on April 4. Funeral services were held in Washington at the home of her nephew, and burial was at her birthplace Buffalo, N.Y.

Born in Buffalo on June 11, 1860 Miss Rathbun was educated in the schools of that city and thereafter devoted a long life of service to the Smithsonian Institution and the U.S. National Museum.

Her brother, Richard Rathbun, later to become assistant secretary of the Smithsonian Institution and director of the National Museum, was, in the early 1870, already launched on a scientific career which had grown out of his interest in fossil animals found in his father’s stone quarries in Buffalo. In the summer of 1881, when he was scientific assistant in the U.S. Fish Commission, his sister accompanied him on one of his annual trips to the commission’s summer laboratory at Woods Hole, Massachusetts. There her own interest in biological research was stimulated, and she continued to visit Woods Hole for the next three summers. So great was her interest that she worked for the Fish Commission from 1881 to 1884 without compensation.

In 1884 she obtained a position as clerk in the Fish Commission, which she held until 1887, when she was appointed by Secretary Spencer F. Baird, of the Smithsonian Institution, to a position as copyist in the Division of Marine Invertebrates of the National Museum. Later she became aide, then assistant curator of this division. After her resignation in 1914, she was appointed honorary associate in zoology, which title she held until her death.

Miss Rathbun worked for many years alone and unaided to build up the Division of Marine Invertebrates to its present high standard of excellence. She instituted a record system upon which others have never been able to improve. It not only is in use in the division to this day, but has been studied and adopted by other divisions of the museum. She also established a systematic catalogue of the thousands of specimens of marine invertebrates handled by the division, whose files contain hundreds of catalogue cards made out by her in longhand during the many years before a typist was available for this work. The division, as it is constituted and operated today, continues to rest upon the solid foundation that she built for it. 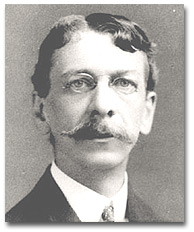 Because of her enterprise, the collections and correspondence of the division grew to such proportions that it became imperative for her to have assistance in handling them. When she asked for such an assistant, however, she was told that the museum funds would not permit the appointment of another person. It was then that she made the decision which forever after endeared her to her colleagues, and particularly to the man who benefited by her action. Without hesitation, on December 31, 1914, she resigned her position, in order that her salary could be used for paying an assistant. The assistant for whom she thus made place was Dr. Waldo L. Schmitt, who later became curator of the division. He declares that but for this act of sacrifice he might never have embarked upon the career to which he devoted his life and which has only recently led to his designation as head curator of the Department of Biology at the museum.

Though now resigned from the museum payroll, Miss Rathbun went to work as usual, and continued to serve full time for twenty-five years thereafter. Thus her Government service ended as it began—with devotion to science and without compensation. 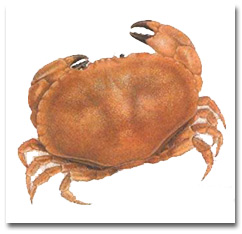 Her own special field of interest was the Crustacea, particularly the crabs, both recent and fossil. Her bibliography on the animals embraces 158 titles. Perhaps her most important and best-known works are her four large monographs on the grapsoid, spider, cancroid and oxystomatous crabs of America, published as bulletins of the U.S. National Museum between 1918 and 1937. In 1917 the George Washington University conferred upon her the degree of doctor of philosophy in recognition of her work on the grapsoid crabs.

Miss Rathbun was interested in a number of charities, but her assistance and contributions to worthy enterprises were given quietly and not much was known about them by her colleagues. It is known, however, that for some years after the last war, when life was very difficult in Austria, she contributed to the support of the small daughter of an Austrian scientist who had long been one of her correspondents. It is only to be hoped that her services to that child, who is now a young woman in Nazi Germany, were not in vain.

Aside from her interest in her work, which took up the greater part of her time, Miss Rathbun was interested in both music and the theater. She was a familiar figure at the concerts given in Washington by the Philadelphia and Boston Orchestras until about four years ago, when her health failed to such an extent that she was no longer able to go out.

To those who knew her and worked with her, Miss Rathbun was a staunch friend, an able counselor and a willing guide. With her passing the museum and science have lost a friend whose loyalty and devotion can not soon be duplicated.

I shall never forget Miss Rathbun! Neither will any of those who ever concerned themselves in any way with crustacean systematics. Her published works alone have enduringly established her as the foremost American carcinologist of her day.

She was a remarkably gifted person. A small, neat woman, no more than four and a half feet in height, with plain, strong features, in conversation a most interesting and engaging personality, with a dry sense of humor, unobtrusively well endowed with the familial traits that had brought success to the men of her family—innate ability, originality of thought, initiative, and enterprise assured the success she herself achieved in the field of carcinology.

Withal, she was a most kindly, charitable person, generous to a fault. During the first World War she quietly put aside all research and writing at the Museum. She was seldom seen there for the duration of the war, as she was serving in the local Red Cross chapter, a dedicated “gray lady,” turning out bandages for the wounded. Then, as provisions and meat became scarce, she sent food parcels to friends and correspondents abroad, and on at least one occasion a huge ham to Dr. W. T. Calman, a fellow carcinologist, the late Keeper of Zoology in the British Museum. Even after the war, as she became aware of the need, she contributed to the support of the small daughter of an Austrian scientist numbered among her foreign correspondents. 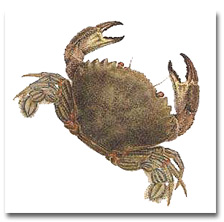 She accomplished a prodigious amount of work in her lifetime—the identification of thousands of specimens, thereby enhancing the Museum’s reference collections, writing the Division’s quarterly and annual reports, carrying on an extensive official correspondence practically all in longhand virtually up to the date of her resignation (1914) and for some 25 years thereafter. All this besides completing her published papers.

Miss Rathbun exemplified to a high degree what a quiet, persevering, modestly ambitious and industrious individual, starting from scratch (1881) could accomplish in less than five decades in a chosen field of scientific endeavor.

The fact that for much of her active life she held relatively minor positions, first with the Commission of Fish and Fisheries and afterwards in the U.S. National Museum, never deterred her from rendering faithful, conscientious performance of her assigned duties, however routine they may have been.

She began, as we have seen, her first year (1886) of life-time service in the Museum as a “copyist,” a not uncommon title in the days before typewriters came into general use in the Smithsonian Institution.

Advancing from an initial stipend of $580 per annum by small biennial increments, she reached the clerical level of compensation of $840 seven years later (1893). During the last of her three years of tenure of the position of “clerk” she co-authored one (1891) and was the sole author of five other systematic studies (1892-1893). These accomplishments must have impressed the powers “that were,” for she was next promoted (1894) to “aid” at $960 per annum, and then four years and fifteen publications later (1898) to “second assistant curator,” a title that appeared on a number of her publications of this period, at $1200. For eight years she served (1898-1906) at that modest emolument before her salary was raised to $1320. She must have been an industrious assistant curator, for, in addition to her routine responsibilities, she produced thirty-five papers besides giving some time to manuscripts of several more published in the next year or two (1906, 1907). This productivity, as the term is employed nowadays, led eventually to her being advanced to full assistant curator (1907), with an initial salary of $1380. Seven more years passed before her annual salary reached its maximum, $1800 (1913).

After serving a mere 18 months as full assistant curator in complete charge of the operation of the Division of Marine Invertebrates, she resigned on the 31st day of December, 1914, with the explicit understanding that her salary be devoted to the hire of an assistant urgently needed for the preparation of the first of her monographic handbooks on American crabs, upon which she had started to work.

With the start of the New Year (1915), in recognition of her long and devoted service to the Museum, the Smithsonian designated her as Honorary Research Associate, one of the Institution’s select group of scholars and scientists. 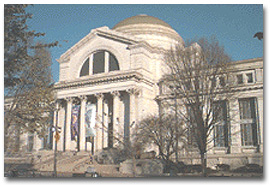 The National Museum of Natural History in Washington, D.C.

In 1916, in recognition of her services to Science, the University of Pittsburgh conferred on her an honorary Master’s Degree, after which she went on to qualify for her doctorate at George Washington University in Washington, D.C., in 1917.

Aside from several trips to Europe, in part to examine crustacean collections in foreign museums, Miss Rathbun’s field work was centered in New England—Woods Hole, Massachusetts, and South Harpswell, Maine. There, with the assistance of an artist, Miss Violet Dandridge, she made a comprehensive collection of all groups of littoral invertebrates. These were sketched in color by Miss Dandridge, in order that the natural colors could be transferred to the preserved specimens when they were later mounted to form a synoptic series of east coast invertebrates.

Never, while able, could she resist the call of Crustacea or the lure of the Museum’s collections. She came daily to her desk through the nineteen thirties until failing health confined her to her home, where a few years later she suffered a fall and a broken hip. The ensuing complications hastened the end. She died in her eighty-third year on April 14, 1943.

During her lifetime she gave the Museum her extensive carcinological library, and at her death bequeathed to the Smithsonian Institution $10,000 to further work on decapod Crustacea in which many another student became interested because of her personal encouragement.

Words alone do not suffice to express adequately my high regard for Miss Rathbun and her works, published or otherwise, my gratitude for all that she did for me, and my respect for her as a woman and as a scientist.

An American National Biography article states: “A Unitarian, she displayed a warm interest in her colleagues and encouraged the careers of many younger carcinologists. She devoted her life to science.”