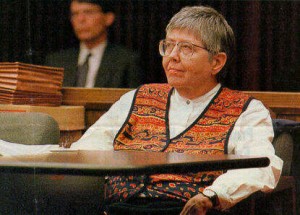 Mary Daly (born October 16, 1928 in Schenectady, New York) is a radical feminist theologian. Before obtaining her three doctorates in sacred theology and philosophy from the University of Fribourg, Switzerland, she received her B.A. in English from the College of Saint Rose, her M.A. in English from the Catholic University of America, and a doctorate in religion from St. Mary’s College. She taught at Boston College, a Jesuit-run institution, for 33 years. Daly was forcibly retired from Boston College in 1999.

Daly is considered by many to be a brilliant feminist philosopher who has intricately woven into words the idea of living out a biophilic life; by others she is considered as a misandrist who practices reverse discrimination and perpetuates sexism. Her work has influenced decades of feminist work and theology continues to make a dramatic impact.

Controversially, Daly refused to admit male students to her introduction to feminist ethics class at Boston College because the subject matter was specific to female students. Instead, she agreed to meet with male students interested in feminism on an individual basis to teach them how men could become biophilic supporters of the movement. The confrontations came to a head in 1998, when she refused to admit a male student into a class she was teaching. According to Boston College, the conflict unfolded as follows: Boston College confronted her and demanded she admit the student; Daly said that she would rather retire. Boston College used this as a “verbal agreement to retire” and forced her out against her will.

When Daly arrived on campus for the new semester, the door to her classroom was locked. She brought a lawsuit against the college in May 1999 because they had violated her rights as a tenured professor. As the case was about to go to trial in early 2001, Daly and Boston College reached an out-of-court settlement.

Click here for supplemental reading about Mary Daly on Amazon.