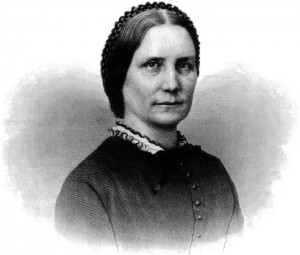 Lived a long, productive life advocating for reform and women’s rights. She was born in Boston on December 19, 1820 into a faithful Calvinist Baptist family. The fourth of six children born to Timothy and Zebiah (Ashton) Rice, was an active, athletic girl, who loved learning. At about the time that she finished attending the Hancock School, her sister Rachel died, and Mary was tormented with the question of salvation. She was sent to the Charlestown Female Academy and graduated when she was sixteen. After a year of teaching, she defied her parents by accepting a position as a governess with a family in Virginia. For three years she experienced slavery firsthand, and became a committed abolitionist. During this sojourn she found books by Deists Ethan Allen and Thomas Paine in her employer’s library, and acquainted herself with these radical views, which she could not reconcile with her childhood orthodoxy. When she returned home, she moved to Duxbury in 1842 to run a school. On Christmas Eve she went out walking and heard a Christmas hymn coming from the Universalist church. Although her childhood church had never celebrated Christmas, and she had heard that Universalists were disreputable, she went in and sat in the back pew. The minister Daniel Livermore preached that God brings everyone safely home, no matter how lost they might feel. After the service Mary met Livermore, and asked for a copy of the sermon. This began a relationship that ended in marriage in 1845.

During the next few years the Livermores moved frequently. Daniel served several churches including Fall River and Weymouth, Massachusetts, and Stafford, Connecticut. Both the Livermores found their views on social issues to be controversial wherever they went. They were advocates for temperance, women’s suffrage and abolition. Because of the difficulties they encountered in parish settings, they developed a new vocation. In 1858 the family, now with three children, moved to Chicago, so that Daniel could become owner and editor of a Universalist paper, The New Covenant. Mary wrote for her husband’s paper and for other publications as well. She was active in the Universalist Church of the Redeemer, and served on the Board of the Northwest Conference of Universalists as well. She once said,

“This faith in Universalism, during the years that I have believed it, has grown upon me, until it is the central thing in me. I do not engage in anything that is not, as I see it, the outcome of this faith. My later comprehension has given me a noble and abiding faith in human destiny.” (from Scott, These Live Tomorrow, p. 145)

In the city she help found the Chicago Home for Aged Women and the Hospital for Women and Children. When the Civil War started, Henry Whitney Bellows chose Mary and another Universalist, Jane Hoge, to be associates of his in the U. S. Sanitary Commission. Livermore visited battlefields, did organizational and administrative work, public speaking, and fund-raising for the organization. She helped arrange two gigantic fairs that raised thousands of dollars.

After the war, she devoted much of her time to woman’s suffrage. She started and edited a paper, The Agitator, which later merged with a Boston paper, Woman’s Journal, of which she became editor. The Livermores moved to Melrose, Massachusetts where they lived for the rest of their lives. After two years of editorial work, Mary switched to the lecture circuit for her prime means of employment. Frequently touching on controversial topics, despite the warning of her agents, she became a popular speaker on topics such as “What Shall We Do With Our Daughters?” and “Concerning Husbands.” From 1875 to 1878 she was president of the American Woman Suffrage Association. In 1878 the Livermores went to Paris to attend the International Women’s Rights Congress. Mary lectured all over Europe, and in England was dubbed the “Queen of the Platform.” Back home she continued to advocate for woman’s suffrage and equal rights. She received an L.L.D. from Tufts University in 1896, the first honorary degree they conferred to a woman. She recounted her war experience in My Story of the War and her entire autobiography in The Story of My Life (1899). She died on May 23, 1905.