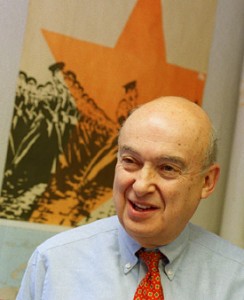 Marshall I. Goldman is Kathryn Wasserman Davis Professor of Russian Economics (Emeritus) at Wellesley College. An expert on the Russian economy and the economics of high technology, he joined the Wellesley faculty in 1958. In 1998, the Wellesley College Alumnae Association awarded him its first Faculty Service Award. He is also Associate Director of the Davis Center for Russian Studies at Harvard University.

Professor Goldman is a 1952 graduate of the Wharton school of the University of Pennsylvania and received M.A. and Ph.D. degrees in Russian studies and economics from Harvard University in 1956 and 1961, respectively. He was awarded an honorary Doctor of Laws degree from the University of Massachusetts, Amherst, in 1985.

An internationally recognized authority on Russian economics, politics, and environmental policy, Professor Goldman is known for his study and analysis of the careers of Mikhail Gorbachev and Boris Yeltsin. He is the author of over a dozen books on the former Soviet Union.