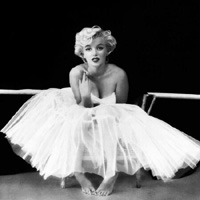 Marilyn Monroe was 36 years old when she committed suicide. Some say she left a legacy of beauty; some say she left a legacy of sadness. Marilyn Monroe herself, by her act of self-destruction, said that she would be a commodity no more. Perhaps her act of self-destruction was her most powerful affirmation of her own worth as a person, an act that forces us to ask questions of the meaning of our lives. What does it feel like to be the world’s reigning symbol of sex? What is there about contemporary society that leads a person to a life of surface success and final despair? Why do our films and magazines and television shows often degrade persons into toys? What is the nature of the authentic person? What is beauty?

Marilyn was answering these questions when she ended her life of world-wide fame. Reflecting on her life, which included three marriages, she left us a legacy of tragic wisdom which contains a hidden affirmation of herself and of life. Let her speak for herself:

When I was 5, I didn’t like the world around me….When I was 11, the whole world suddenly opened up. Every fellow honked his horn. The world became friendly…but people could get suddenly overfriendly…. They’d all like sort of a chunk of you. The things they try to do to you, it’s hard to take….

If you ’ve noticed, in Hollywood there aren’t any monuments or museums. Nobody left anything behind. They took it, they grabbed it, and they ran—the ones who made the millions….

Fame is not what fulfills you….

Beauty and femininity are ageless and can’t be contrived. Glamor can’t be manufactured. Not real glamor….I just hate to be a thing. It might be kind of a relief to be finished.

Was she speaking of her film from which she had already been fired because of absences which she said were due to her sickness, or speaking of another end?

In New York in the 1880’s, a mother took it as a personal affront that her toddling daughter, Eleanor, was not the beauty expected in their family line. Eleanor Roosevelt rarely smiled in the presence of her mother, but she was joyful with her father. He, however, became an alcoholic and had to enter a sanitorium. Eleanor was 6 years old when her mother declared to her face, “You have no looks!” and put her in a convent.

When Eleanor was only 8, her mother died. The child was given no real education and had no playmates her own age except one girl who was able to visit her for one day in the summer. When Eleanor was 15 and was sent to boarding school in Europe, the headmistress was as struck by her premature wisdom as by her lack of previous education.

Despite all this, on March 17, 1905, President Theodore Roosevelt was present for a wedding in New York, giving away the bride in one of the year’s most noted weddings. After the wartime death of her long disabled husband, Eleanor did not withdraw to a widow’s retirement but renewed her dedication to world peace. Day and night she worked on the Universal Declaration of Human Rights. This took two years of such constant, disciplined, patient power against intense opposition that India’s delegate to the United Nations Security Council referred to her as “a United States phenomenon comparable to Niagara Falls.”

If you ever happened to hear Mrs. Roosevelt speak in person concerning this Declaration, as it was once my privilege to do, you know she united the strength of Niagara with the patient love which outlasts hate and fear. The only other time I saw her was at a Unitarian Service Committee banquet. As Eleanor Roosevelt entered the room, every man and woman—irrespective of political party preference—arose in admiration. Reverent appreciation sparked clear across the room. She not only walked in beauty; she walks in beauty still.