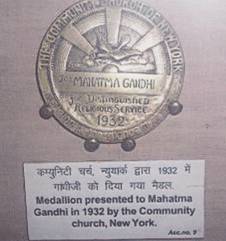 But who is to receive this first Medal for 1931? I love to think of the answer to this question which came back like a shot out of a gun when I addressed it, some months ago, to Rabbi Wise. “Why,” he said, “there is only one man to be considered.” And he named the man who had been in my own mind, not so much for any sudden or unique achievement in 1931, as for a general power and elevation of spiritual leadership which is the wonder of our times. If we would have all the world to know what we mean by “distinguished religious service,” and if we would set a standard at the start which would “shine as the stars forever and ever,” whom could we name as the first recipient of our Medal but Gandhi, the Mahatma of India?

To many who know Gandhi only as the heroic leader of a nationalist cause, it may be surprising that he should be singled out for religious recognition. But nobody can understand the Mahatma who does not see that he is fundamentally not a political but a spiritual figure. If he is struggling for the independence of his country at this hour, as our fathers struggled for the independence of our country a century and a half ago, it is not so much as an end in itself as a means toward the farther end of preserving and fulfilling the higher spiritual interests which are implicit in Eastern culture. A distinguished Englishman, Sir Francis Younghusband, has seen this truth with perfect clearness. Gandhi, he says, has done remarkable things for India. He has brought the country to the forefront of world attention; he has instilled courage into its people, and made them conscious of the dignity and power of their manhood; he has aroused in his fellow-countrymen a sense of nationhood and thus of common destiny; but, most of all, he has denounced materialism, glorified spiritual values, and placed religion at the heart of India’s life.

There are three qualities, or achievements, it seems to me, which mark Gandhi as incomparably the outstanding religious leader of this age. First, there is the discipline of his inner life, which has tamed the passions of mind and body and made them momentous agents of the spirit. Gandhi is one of the immortal saints of history. Secondly, there is his rule of brotherhood which overleaps the barriers of caste in his own country, and includes within its scope all nations, races and religions of mankind. Gandhi is one of those rarest of all figures, a universal man. Lastly, there is his mastery of love which, as worked out in his famous formula of non-violence or soul-force (Satyagraha), offers the one means of human progress and association which can save mankind from the doom which now impends. Gandhi is perhaps the one man alive upon this earth capable of speaking those words, so perfectly embodying the ideal of the Sermon on the Mount, which he addressed to Englishmen on the eve of his arrest and imprisonment—“I love them,” he said, of these alien conquerors and rulers of his native land, with whom he is engaged in a struggle to victory or death, “I love them as I love my own countrymen. I have never done anything towards them in hatred or malice, and God willing, I never shall.” Added to these qualities is a mystic vision and understanding, an inner communion with God and an outer practice of prayer and piety, which lift Gandhi to spiritual heights which only the few chosen souls of all the ages have attained.

Do you wonder that, by unanimous consent of the judges, the first award of this Medal has been made to the Mahatma? It is remarkable, perhaps that it should be granted not to a Christian, nor an American, nor any outstanding leader of our Western world, but to a citizen of the distant and mysterious East. But if remarkable, it is also inevitable, for all great religions have come from the East, and every supreme religious genius has been the son of Eastern peoples. Mahatma Gandhi is simply in the sublime succession of Lao-tse, Zoroaster, Buddha, Isaiah, Jesus, Mohammed, Baha-O’llah.