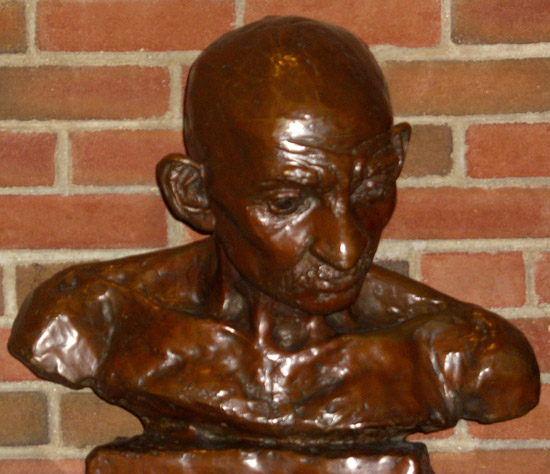 Bust of Gandhi from The Community Church in New York.

When I was a young conscientious objector during World War II—before I was sentenced to three years in federal prison by a judge in Lynchburgh, Virginia—I visited New York.

Rev. John Haynes Holmes, a pacifist, was preaching at the worship service of the Community Church of New York then being held in New York City’s Town Hall after a fire had ruined his eminent stone Unitarian Church. Never before had I heard anyone speak with such passionate eloquence, presenting a case for worldwide revolutionary, interfaith liberal religious pacifism.

What I heard that morning inspired me, after my release from prison, to become a Unitarian minister focused on urgent issues of social responsibility. My later years of community ministry with the First Parish in Cambridge, Unitarian Universalist, included the development of weekly Cambridge Forum programs focused on social responsibility issues. These forums, which became weekly national radio broadcasts and frequent national public tevelevision broadcasts, are a continuing consequence of the inspiration of Dr. Holmes, whose ministry in New York received a Centennial Celebration by the Community Church of New York in 2007, and the celebration continues in this publication.