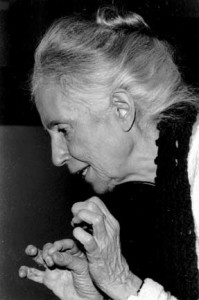 Margaret Eliza Kuhn was born on August 31, 1905, in Buffalo, New York. She preferred to be called “Maggie” instead of Margaret. She attended Western Reserve University in Cleveland. Commenting on her education, she said, “In those days, higher education for women was still in its adolescence. We were given two career option—nursing and teaching—and it was expected that any career would be interrupted early on for marriage. I majored in English literature with minor studies in sociology and French.” In her sophomore year she joined Gamma Delta Tau sorority. In 1926, she graduated from Western Reserve with honors.

In 1930, she became head of the Professional Department of business girls at the Young Women’s Christian Association (YWCA) in the Germantown section of Philadelphia. She believed in the Y’s philosophy: “One of the things I valued most about the Y was its belief in the ability of groups to empower the individual and to change society. Social workers back then called it “group work.” The idea was that individuals find purpose and meaning through group association.”

After the YWCA’s USO division was phased out in 1948, she became program coordinator for the General Alliance for Unitarian and Other Liberal Christian Women in Boston, Massachusetts. In 1970, at the age of 65, she met with a group of five of her friends to address the problems of retirees. The group that grew out of this meeting was named the Consultation of Older and Younger Adults for Social Change. After a year, the organization had 100 members. The group was later named the Gray Panthers in 1972. In 1973, eleven chapters of the Gray Panthers were opened. In 1975, the Gray Panthers held its first national convention in Chicago. The Gray Panthers quickly received public notoriety and grew as a national organization. In 1990, the Gray Panthers public policy office opened in Washington, D.C. Kuhn described the mission of the Gray Panthers, “In the tradition of the women’s liberation movement, the common mission of all the Gray Panther groups was consciousness-raising. Instead of sexism, we were discovering “ageism”—the segregation, stereotyping, and stigmatizing of people on the basis of age.” Over the years, the Gray Panthers have been involved in grassroots activities that deal with public and governmental policies that deal with the elderly. Maggie Kuhn, the Gray Panthers’ charismatic leader changed the face of society with regard to the elderly.