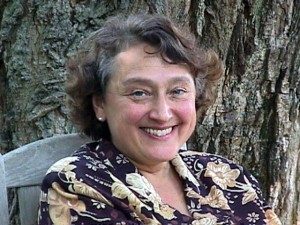 Lynn Margulis, Distinguished University Professor at the University of Massachusetts, was born in 1938 and grew up in Chicago during the Great Books era. Chancellor Robert Hutchins had instituted a curriculum in which students read original works, following the development of ideas rather than academic disciplines, an intellectual approach that Margulis embraces to this day.

She went on to complete her Ph.D. at the University of California at Berkeley. By 1970 she was an associate professor at Boston University. It was then that she wrote the most comprehensive account of her ideas: The Origin of Eukaryotic Cells. One reviewer wrote “Readers will find this book sprawling, stimulating, irritating and challenging but they will have difficulty ignoring it.” In the book she proposed that mitochondria and chloroplasts evolved symbiotically. These ideas were so much at odds with the established point of view that, according to another observer, they “could not be discussed at respectable scientific meetings.”

Although aspects of the symbiotic theory of cell evolution still provoke controversy, the theory is now taught to high school students. “This quiet revolution in microbiological thought is primarily due to the insight and enthusiasm of Lynn Margulis” states Yale ecologist G. E. Hutchinson. “Hers is one of the most constructively speculative minds, immensely learned, highly imaginative and occasionally a little naughty.”