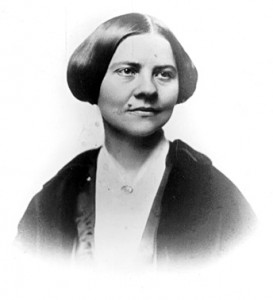 An ancestor of Lucy Stone arrived in Massachusetts in 1635, and a grandfather was a captain in the American Revolution. She grew up in a farm family. When sixteen, she taught school before attending Oberlin College in Ohio—a coeducational college opposed to slavery.

When Lucy Stone was appointed an Anti-Slavery Society lecturer, she agreed to speak for them only on weekends. This meant she was free to lecture weekdays on women’s rights. She declared, “I was a women before I was an abolitionist. I must speak for the women.”

Upon accepting Unitarianism, she was expelled from her Congregational church.

When she married, she kept her own name: Mrs. Stone.

When she refused to pay taxes to a government in which she could not participate, household goods were seized.

Mrs. Stone was a founder of the American Equal Rights Association, which worked for voting rights irrespective of race and sex. Her influence was especially effective throughout forty-seven years of the editing of the Woman’s Journal by her, with assistance from her husband, Henry Blackwell, and their daughter, Alice Stone Blackwell.

When she died, she was the first person to be cremated in New England.