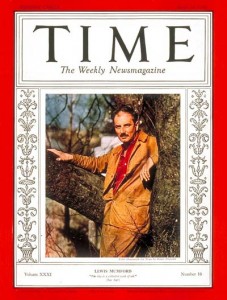 Internationally renowned for his writings on cities, architecture, technology, literature, and modern life, Lewis Mumford was called by Malcolm Cowley “the last of the great humanists.” His contributions to literary criticism, architectural criticism, American studies, the history of cities, civilization, and technology, as well as to regional planning, environmentalism, and public life in America, mark him as one of the most original voices of the twentieth century.

Born in Flushing on October 19, 1895, Mumford lived much of his life in New York. His first book, The Story of Utopias, was published in 1922, and his last book, his autobiography Sketches from Life, was published sixty years later in 1982.

He was architectural critic for The New Yorker magazine for over thirty years, and his 1961 book, The City in History, received the National Book Award. Despite what he saw as a likelihood catastrophic dehumanization, he argued for the hope that the organic depths of human nature, of the “fibrous structure of history,” might provide the basis for a transformation of megatechnic civilization.

Pentagon of Power: The Myth of the Machine, Vol. II by Lewis Mumford